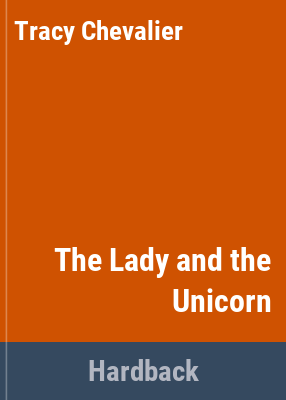 The lady and the unicorn / Tracy Chevalier.

Set over the period 1490 to 1492, Tracy Chevalier's novel moves between a chateau in Lyons and the cities of Paris and Brussels. The story concerns a series of six Flemish tapestries known as the lady and the unicorn tapestries.

Chevalier (Girl with a Pearl Earring) has written another novel featuring a world-famous masterpiece. In this case, it's a series of woven panels called the Unicorn Tapestries, made in the late 15th century. Because nothing is known about the real artist, Chevalier creates one: Nicolas des Innocents, a coarse opportunist who is commissioned to do the artwork even though his specialty is painting miniatures of court ladies. Unfortunately for him, he becomes enamored of his patron's young daughter, Claude le Vista, who is determined to lose her virginity to him. A chorus of alternating characters each relate their part in the tapestry's creation and how it changed their life-for better or worse. Historical details, an intriguing plot, and captivating characters make this an enjoyable and rewarding experience. While some may wish the story had more meat, others will be more than satisfied with this literary delight. Recommended for all public libraries. [Previewed in Prepub Alert, LJ 9/1/03; the film version of Girl with a Pearl Earring, starring Colin Firth and Scarlett Johansson, will most likely increase demand for all of Chevalier's books.-Ed.]-Kellie Gillespie, City of Mesa Lib., AZ (c) Copyright 2010. Library Journals LLC, a wholly owned subsidiary of Media Source, Inc. No redistribution permitted.

Chevalier, whose bestselling Girl with a Pearl Earring showed how a picture can inspire thousands of words, yokes her limpid, quietly enthralling storytelling to the six Lady and the Unicorn tapestries that hang in the Museum of the Middle Ages in Paris. As with her Vermeer novel, she takes full creative advantage of the mystery that shrouds an extraordinary collaborative work of art. Building on the little that is known or surmised-in this case that the tapestries were most likely commissioned by the French noble Jean Le Viste and made in a workshop in Brussels at the end of the 15th century-she imagines her way into a lost world. We are introduced to Nicholas des Innocents, the handsome, irrepressibly seductive artist who designed the works for the cold Le Viste, a rich, grim social climber who bought his way into the nobility and cares more about impressing the king and his court than pleasing the wife who has disappointed him by bearing three girls and no sons. Le Viste's wife, Genevi?ve, tells Nicholas to create scenes with a unicorn but Nicholas's love of women-and especially of Genevi?ve's beautiful daughter Claude-inspires the extraordinary faces and gestures of the women he depicts. A great romance unfolds. What makes the tale enthralling are the details Chevalier offers about the social customs of the time and, especially, the craft of weaving as it was practiced in Brussels. There are psychological anachronisms: would a young woman in medieval times express her pent-up frustrations by cutting herself as some teenage girls do today? Yet the genuine drama Chevalier orchestrates as the weavers race to complete the tapestries, and the deft way she herself weaves together each separate story strand, results in a work of genuine power and beauty. And yes, readers will inevitably think about what a gorgeous movie this would make. (Jan.) Forecast: If any of Chevalier's novels has a chance to match the success of Girl with a Pearl Earring, it's this one. Expect it to rise fast on bestseller lists. (c) Copyright PWxyz, LLC. All rights reserved

Adult/High School-This fanciful, engaging tale of the making of the famous unicorn tapestries is woven together as cleverly as the artworks themselves. Dynamic Nicolas des Innocents is proud of his skill as a painter and of his sexual prowess, and displays both at every opportunity. Always in need of funds, he persuades Jean Le Viste, a powerful Parisian nobleman, to commission a series of six tapestry designs of Nicolas's choosing: scenes focused on the unicorn, a fabled symbol of male virility and mysterious powers. Jean's pious wife colludes with the artist, as do her daughter and her lady-in-waiting. Nicolas courts them all. He journeys to Brussels, where his fate becomes intertwined with the family weaving the tapestries, but most of all their daughter, Alienor, whose blindness dooms her to betrothal to a brutish wool dyer. The "family" also includes the workers who assist them, one of whom, shy Philippe, secretly adores Alienor. The deadline for completion of the tapestries is moved up, and tension increases as all concentrate on the task. The major characters' reactions to their world-early 1490s France-are revealed, like the tapestries being woven, a little at a time. The French court and its aristocracy; Flemish weavers, their work ethic, and their powerful guild-all are delineated with the consummate skill Chevalier brought to Girl with a Pearl Earring (Dutton, 2000).-Molly Connally, Chantilly Regional Library, VA (c) Copyright 2010. Library Journals LLC, a wholly owned subsidiary of Media Source, Inc. No redistribution permitted.

The author of Girl with a Pearl Earring (2000) and Falling Angels (2001) offers a luminous tale about a set of medieval tapestries known as the Lady and the Unicorn sequence. Nicolas des Innocents, a handsome, lascivious artist, is summoned to the home of Jean Le Viste, a nobleman who wants Nicolas to design a series of battle tapestries. Jean's wife, Genevieve, persuades Nicolas to talk her husband into a softer subject: the beguilement of a unicorn by a noblewoman. Nicolas shapes the tapestries with his own vision, dedicating five of the six to the senses and using the images of Genevieve and her daughter, Claude, with whom Nicolas is smitten, for the ladies. After finishing the paintings, Nicolas travels from Paris to Brussels, where Georges de la Chapelle will weave them. At first Nicolas is standoffish and scornful of Georges but gradually comes to respect him and take an interest in his blind daughter. But Nicolas' heart lies with the unattainable Claude. Chevalier meticulously describes the complex process of creating a tapestry, from its conception to the moment it is pulled off the loom. The story she weaves is as lush as the tapestries she describes, and her colorful characters leap off the page. A romantic, beautiful book. --Kristine Huntley Copyright 2003 Booklist

A delightful historical imagines the creation of the most famous medieval tapestries ever woven. In the Cluny Museum in Paris hang six tapestries depicting a lady and a unicorn. Art historians speculate (based on the style and the coat of arms displayed prominently throughout) that the tapestries were woven around 1500 for the Le Viste family, but little else is known about them with any certainty. Chevalier (The Virgin Blue, p. 767, etc.) steps in to supply a history, envisioning one Nicolas des Innocents, a Parisian miniaturist of the 14th century, as the one commissioned by Jean Le Viste to create a set of hangings for a townhouse on the rue du Four. An ambitious social climber, Jean was eager to make a name for himself as a patron of the arts. Here, he originally requests works depicting the Battle of Nancy, but his wife, the pious and strong-willed Genevieve de Nanterre, conspires with Nicolas to change the subject to an allegorical representation of a lady seducing a unicorn. That's easy work for Nicolas, a thoroughgoing cad who has already impregnated one of the maids in the Le Viste household and soon sets off in shameless pursuit of Jean's beautiful daughter Claude. The artistic temperament's licenses are not widely condoned in medieval France, however, and Genevieve quickly puts the passionate Claude under lock and key and threatens to marry Nicolas off to her plain lady-in-waiting, Beatrice. Eventually, the lovelorn Nicolas (who ends up modeling the lady in the tapestries on Claude) is sent off himself, to Brussels, to collaborate with master weaver Georges de la Chapelle. What's the end result of all this (apart from the tapestries)? Let's just say that a labor of love invariably costs more than a bit of one's heart. Marvelously imagined and sharply constructed, with a good feel for the people and the era: a fascinating portrait of the intersection of life and art. Copyright ©Kirkus Reviews, used with permission.
More book reviews at iDreamBooks.com