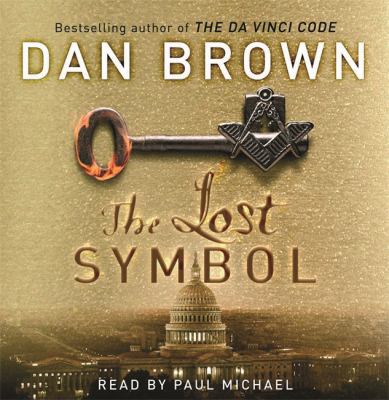 Dan Brown's new novel, the eagerly awaited follow-up to his #1 international phenomenon. It will once again features Dan Brown's unforgettable protagonist, Robert Langdon. Brown's longtime editor, Jason Kaufman, Vice President and Executive Editor at Doubleday said, "Nothing ever is as it first appears in a Dan Brown novel. This book's narrative takes place in a twelve-hour period, and from the first page, Dan's readers will feel the thrill of discovery as they follow Robert Langdon through a masterful and unexpected new landscape. The Lost Symbol is full of surprises.

Brown's long-awaited blockbuster (after The Da Vinci Code) does not disappoint. Robert Langdon receives an invitation to give a lecture in Washington, DC, but discovers an empty chamber when he arrives at the venue. He quickly learns that he's been summoned for his knowledge rather than his oratory skills and that his friend Peter Solomon has been abducted. To save his life, Langdon must follow a set of clues and uncover a treasure hidden somewhere in the nation's capitol. Brown follows the template that worked in his earlier Langdon novels and proves he is the undisputable master of the genre. He even takes time to poke fun both at his popularity and the six-year gap between books. Verdict Not playing it safe, Brown crafts a compelling thriller with a rather odd yet intriguing nemesis; the final revelation is guaranteed to stir up more controversy and offshoots examining the themes explored. Buying this book is a no-brainer, but reading it will activate the brain cells in a way few suspense novels achieve. [See Prepub Alert, LJ 5/15/09.]-Jeff Ayers, Seattle P.L. (c) Copyright 2010. Library Journals LLC, a wholly owned subsidiary of Media Source, Inc. No redistribution permitted.

After scores of Da Vinci Code knockoffs, spinoffs, copies and caricatures, Brown has had the stroke of brilliance to set his breakneck new thriller not in some far-off exotic locale, but right here in our own backyard. Everyone off the bus, and welcome to a Washington, D.C., they never told you about on your school trip when you were a kid, a place steeped in Masonic history that, once revealed, points to a dark, ancient conspiracy that threatens not only America but the world itself. Returning hero Robert Langdon comes to Washington to give a lecture at the behest of his old mentor, Peter Solomon. When he arrives at the U.S. Capitol for his lecture, he finds, instead of an audience, Peter's severed hand mounted on a wooden base, fingers pointing skyward to the Rotunda ceiling fresco of George Washington dressed in white robes, ascending to heaven. Langdon teases out a plethora of clues from the tattooed hand that point toward a secret portal through which an intrepid seeker will find the wisdom known as the Ancient Mysteries, or the lost wisdom of the ages. A villain known as Mal'akh, a steroid-swollen, fantastically tattooed, muscle-bodied madman, wants to locate the wisdom so he can rule the world. Mal'akh has captured Peter and promises to kill him if Langdon doesn't agree to help find the portal. Joining Langdon in his search is Peter's younger sister, Kathleen, who has been conducting experiments in a secret museum. This is just the kickoff for a deadly chase that careens back and forth, across, above and below the nation's capital, darting from revelation to revelation, pausing only to explain some piece of wondrous, historical esoterica. Jealous thriller writers will despair, doubters and nay-sayers will be proved wrong, and readers will rejoice: Dan Brown has done it again. (Sept. 14) Copyright 2009 Reed Business Information.

A mysterious clue leading to a series of puzzles; a ruthless villain who will stop at nothing; ancient secrets; mysterious organizations that link past to present Brown has taken the elements that made The Da Vinci Code a success and reworked them in this long-anticipated sequel. Robert Langdon, the symbologist hero of Da Vinci Code and Angels and Demons, is lured to Washington, D.C., where he believes he is to give a speech. Instead, he finds that an old friend has been abducted. Only Langdon can unlock the hidden mysteries that can save his friend's life. Brown combines Freemasons, the Institute of Noetic Sciences, Albrecht Durer, and various other ingredients to create a story that could be a mishmash but never quite loses cohesiveness. Readers who found the previous Langdon novels to be excessively wordy and much too slowly paced will level the same criticisms here, and Brown really needs to cool it with the amateurish overuse of exclamation marks, italics, and sentence-ending punctuation like ?! On the other hand, you can't deny that he knows how to put together an intriguing, if emotionally uninvolving, story: he keeps us guessing with his riddles and puzzles, and we move through the story in a cantering, orderly fashion. Other writers could have taken this story and really run with it Matthew Reilly, say, or James Rollins but fans of the first two Langdon novels will flock to this one and they won't be disappointed. One final note: Brown may have done himself a slight disservice by setting the novel in Washington: he's inviting comparison to the lighter, and livelier, National Treasure movies.--Pitt, David Copyright 2009 Booklist
More book reviews at iDreamBooks.com