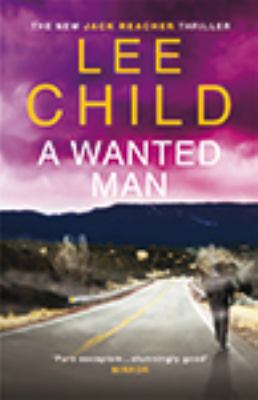 Genre/Form: Detective and mystery fiction. | Large type books.DDC classification: Online resources: Click here to access online Summary: When you're as big and rough as Jack Reacher - and you have a badly set, freshly busted nose - it isn't easy to hitch a ride. At last he's picked up by three strangers, two men and a woman. Within minutes it becomes clear they're all lying about everything - and there's a police roadblock ahead. There has been an incident, and the cops are looking for the bad guys... Will they get through because the three are innocent? Or because they are now four? Is Reacher just a decoy?
Tags from this library: No tags from this library for this title. Log in to add tags.
Fiction notes: Click to open in new window

When you're as big and rough as Jack Reacher - and you have a badly set, freshly busted nose - it isn't easy to hitch a ride. At last he's picked up by three strangers, two men and a woman. Within minutes it becomes clear they're all lying about everything - and there's a police roadblock ahead. There has been an incident, and the cops are looking for the bad guys... Will they get through because the three are innocent? Or because they are now four? Is Reacher just a decoy?

In his 17th outing, the indomitable Jack Reacher finds himself seeking a ride in snowy Nebraska. Picked up by a car with three passengers, Child's hero slowly learns everything is not as it seems. Although the plot eventually becomes complex and the action intense, much of the story involves driving through lonely roads with Reacher struggling to figure out what is going on. Adding to the slow pace is the needless repetition of details and events. Dick Hill, an expert reader of thrillers, seems too deliberate here, perhaps affected by Child's plodding pace. Because Reacher has suffered a broken nose, Hill reads the hero's dialog as if he has a cold, adding some unintentional humor. VERDICT This series installment will be "wanted" only by Child/Reacher diehards. ["Fans will devour this volume quickly and long for the next Reacher novel. Readers who enjoy character-driven thrillers such as Robert Ludlum's Jason Bourne books will be intrigued by this series," read the more-forgiving review of the New York Times best-selling Delacorte hc, LJ 9/1/12.-Ed.]--Michael Adams, CUNY Graduate Ctr. (c) Copyright 2013. Library Journals LLC, a wholly owned subsidiary of Media Source, Inc. No redistribution permitted.

In Child's latest Reacher novel, his ex-army hero is hitchhiking to Virginia, battered but unbowed, when he's picked up by a car carrying three men and a woman. Much of the book takes place in that car, with the always-suspicious Reacher doing a lot of sleuthing into the backgrounds of his mysterious fellow passengers. His suspicions are, of course, well founded. The four are connected to at least one murder. Before too long, Reacher has switched vehicles, now driving with a beautiful FBI agent and following his former companions into the heart of a seemingly inscrutable conspiracy. Some listeners may find the road trip a little meandering and the arbitrary death of a likeable character off-putting, but none should have any complaints about narrator Dick Hill's vigorous, sardonic performance in this audio edition. His reading is perfectly tuned to Child's hardboiled prose, and the narrator maintains an energy level that's high enough to carry the listener past some of the book's slower passages. Of special note is Hill's ability to pick just the right word to linger on, nicely capturing Reacher's attitude, be it one of distrust, sarcasm, anger, or, in rare instances, warmth. A Delacorte hardcover. (Sept.) (c) Copyright PWxyz, LLC. All rights reserved.

*Starred Review* If a Lee Child novel begins with Jack Reacher standing by the side of a highway with his thumb out, you can be sure that the wrong guy is going to pick him up. You can also be sure that the novel will end with Reacher standing by the side of another highway, again with his thumb out. In between, all hell will break loose, with the mysterious Reacher, the man with no home, in the middle of it, subduing bad guys one bullet, or one head butt, at a time. In this seventeenth series installment, the wrong guys who pick Reacher up on a lonely Nebraska highway turn out to be two murderers and their female hostage or at least that's who we think they are, for a while. We think a lot of things for a while about terrorists, Homeland Security bumblers, warring FBI factions, and undercover agents but almost all our assumptions turn out to be false. Mostly, though, we don't have much time for thinking, since we're strapped into various Ford Crown Victorias the standard-issue automobile of local cops and the FBI alike careening down midwestern interstates as Reacher, sometimes a captive, sometimes a pursuer, plots to save the endangered and smite those who do the endangering. There may not be as much actual violence in this novel as in other Reachers, but when it comes, it comes in thunder, and the tension leading up to it feels never-ending. Our mothers were surely right to warn us against hitchhiking, both because the wrong guys might pick us up and, especially, because we're not Jack Reacher, much as we'd like to be. HIGH-DEMAND BACKSTORY: Jack Reacher prefers to come and go across the country anonymously, but that's not at all true of the novels in which he appears. The publication of every new Reacher is heralded through every possible form of mass communication. Boy, would Reacher hate that.--Ott, Bill Copyright 2010 Booklist

Will Jack Reacher ever make it to that woman in Virginia he was trying to reach in Worth Dying For (2010)? Not if all hell continues to break loose in Nebraska. Shortly after an eyewitness sees three men enter a small concrete bunker outside an anonymous town and only two of them emerge, Reacher, "just a guy, hitching rides," is picked up by a trio of corporate-sales types: Alan King, Don McQueen and Karen Delfuenso. In a tour de force that runs well over a hundred pages, Child cuts back and forth between the clues county sheriff Victor Goodman and FBI agent Julia Sorenson gather concerning the unidentified man in the green coat who was stabbed to death inside that bunker and the inferences Reacher is making about his traveling companions. For one thing, it's clear that King and McQueen know each other better than either of them knows Delfuenso; for another, a good deal of what they casually tell him about themselves isn't true. Just when you've settled down expecting Child to keep up this rhythm indefinitely, he switches gears in an Iowa motel, and Reacher's left out of danger but on his own--at least until Sorenson arrives to arrest him and the two of them form a quicksilver partnership whose terms seem to change every time Sorenson gets another phone call from the cops or the Feds. After working every change imaginable on their relationship, Child switches gears again and sends them a bang-bang assault on a hush-hush installation that shows how far into America's heartland its enemies have penetrated. In this latest attempt to show Reacher enjoying every possible variety of conflict with his nation's government short of outright secession, Child (The Affair, 2011, etc.) has produced two-thirds of a masterpiece.]] Copyright Kirkus Reviews, used with permission.
More book reviews at iDreamBooks.com