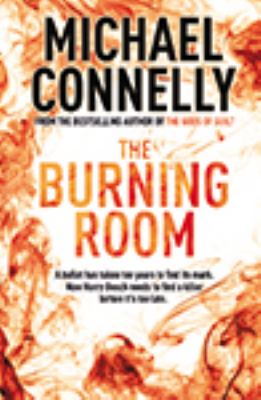 Genre/Form: Detective and mystery fiction. | Large type books.Summary: In the LAPD's Open-Unsolved Unit, not many murder victims die a decade after the crime. So when mariachi musician Orlando Merced finally succumbs to complications from being shot ten years earlier, Bosch catches a case in which the body is still fresh, but any other evidence is virtually nonexistent. Partnered with rookie detective Lucia Soto, Bosch begins to see political dimensions to the case. Soto soon reveals a burning obsession that could make her a loose cannon, while the one piece of evidence they have on the Merced shooting points in a shocking and unexpected direction that could unsettle the very people who want Bosch to close out the case. It's looking like Orlando Merced may not be the investigation's only victim...
Tags from this library: No tags from this library for this title. Log in to add tags.
Fiction notes: Click to open in new window

In the LAPD's Open-Unsolved Unit, not many murder victims die a decade after the crime. So when mariachi musician Orlando Merced finally succumbs to complications from being shot ten years earlier, Bosch catches a case in which the body is still fresh, but any other evidence is virtually nonexistent. Partnered with rookie detective Lucia Soto, Bosch begins to see political dimensions to the case. Soto soon reveals a burning obsession that could make her a loose cannon, while the one piece of evidence they have on the Merced shooting points in a shocking and unexpected direction that could unsettle the very people who want Bosch to close out the case. It's looking like Orlando Merced may not be the investigation's only victim...

Starred Review. Orlando Merced is finally dead from the bullet that struck him in the spine and paralyzed him a decade ago as he played with his band in Los Angeles's Mariachi Plaza, and the LAPD's Open-Unsolved Unit has caught the case. Such investigations are rarely straightforward, but soon detectives Harry Bosch and his new partner, "Lucky" Lucy Soto, discover that the victim had ties to a mayoral hopeful, putting a political spin on their probe. Bosch has never had patience for political machinations, interoffice or otherwise, and he must juggle this complication along with an inexperienced and untested partner. Bosch finds himself in shark-filled waters with a murder case that turns out to be about much more. His love for the job and for the City of Angels, warts and all, and his fierce sense of justice are among the many things that make this series great. VERDICT Connelly's (The Gods of Guilt) exceptional gift for crafting an intricate and fascinating procedural hasn't faded a bit. Our protagonist remains, after 19 books, one of the most intriguing creations in crime fiction, even as he faces his impending retirement. A humdinger of an ending will have readers anxiously awaiting the next book. [See Prepub Alert, 5/12/14.]-Kristin Centorcelli, Denton, TX (c) Copyright 2014. Library Journals LLC, a wholly owned subsidiary of Media Source, Inc. No redistribution permitted.

In this latest entry in Connelly's long-running Harry Bosch series, the driven detective, with only a year left before retirement, is assigned a new partner-a rookie named Lucia Soto-whose dedication to the job convinces Harry to become her mentor. Together they take on the cold case of a man who died of a lodged bullet from a gunshot 10 years earlier. But over the course of the investigation Harry discovers a hidden agenda of Lucia's. Reader Welliver, who stars as Harry in the upcoming TV series, presents the third-person narration in a strong, no-nonsense manner, while catching every obsessive, blunt, impatient, hard-charging, department politics-hating, justice-demanding aspect of Harry's dialogue and attitude. He distinguishes among side characters through their moods rather than creating unique voices or accents for each. There are disgruntled beat cops, angry captains, aggressive criminals-a cool female coroner here, a sly politician there. For the novel's other main character, Lucia Soto, Welliver lightens his tone only slightly, adding an affected eagerness that, on occasion, can harden into an iron determination to get the job done. Just the type of partner Bosch can appreciate. A Little, Brown hardcover. (Nov.) © Copyright PWxyz, LLC. All rights reserved.

*Starred Review* Harry Bosch has retired from the LAPD before and then come back, but this time it appears he's played out his string. So when Harry is paired with a rookie detective in a cold case like no other the victim of a nine-year-old shooting has only now died, leaving the detectives with a warm corpse and a cold investigation he's tasked with a dual charge: find the killer and train the newbie, Lucy Soto, who has an agenda of her own. As a child, Soto, an orphan, was trapped in a burning building and watched many of her friends die before she was rescued. No one was ever arrested for the arson, and Lucy is out to solve her own cold case against the rules and off the books. Harry, who has never seen a rule he wasn't willing to break, agrees to help his new partner, if she agrees to put their real case first. That becomes considerably easier to do when it appears the two may be connected. Ah, but there's a rub: the trail leads to what Bosch calls high jingo, political considerations that mean interference from the big bosses. By putting the emphasis on the training of a young detective, Connelly shows us a side of Bosch we tend to de-emphasize, stressing instead his maverick attitude and his battles against inner demons. Harry is also a damn good detective, eschewing databases and cell phones to do his investigating by following the old-school motto of Get off your ass, and go knock on doors. Sadly, door-knocking doesn't always win in the face of high jingo, or even garden-variety bureaucrats, and if the Bosch series teaches us anything, it's that hard work is often its own and only reward. That's the real lesson Bosch must teach Lucy and he does it in grand style. HIGH-DEMAND BACKSTORY: Connelly's 26 novels have sold more than 58 million copies worldwide, proving that crime-fiction fans love a maverick.--Ott, Bill Copyright 2014 Booklist

The latest and most intricate of Harry Bosch's cold cases (The Black Box, 2012, etc.) begins with a victim who's still cooling off in the morgue.Orlando Merced was shot 10 years ago by a sniper who fired into his band, Los Reyes Jalisco, as it played on Mariachi Plaza. He's just now died of blood poisoning, but the coroner's office is calling it murder, since the cause was the bullet that's been lodged in his body all these years. Ex-Los Angeles mayor Armando Zeyas, who can't resist grandstanding on behalf of the dead man who played at his wedding, offers a $50,000 reward guaranteed to bring the crazies out of the woodwork, and one of the callers tells Bosch's very junior new partner, Detective Lucia Soto, that the shooting is linked to a 1993 fire at the Bonnie Brae apartments that killed nine victims, most of them children. Since Soto survived that fire as a child and had friends who didn't, she comes to full alert when the anonymous tipster claims Merced was killed because he knew who set the fire. The two crimes are both linked, it turns out, to another crime, the violent robbery of an EZBank the same day as the Bonnie Brae arson. Though the felonies may be ancient, Connelly (The Gods of Guilt, 2013, etc.) maintains a rapid pace, steadily increasing the tension even after the solution becomes obvious. Following Bosch's trail is like watching Lew Archer in the glory days of Ross Macdonald, except Connelly's focus is social, political and ultimately professional rather than psychological. Expect Bosch to uncover a nest of vipers as powerful as they are untouchable, but don't expect him to emerge from his Herculean labors a happy man. Copyright Kirkus Reviews, used with permission.
More book reviews at iDreamBooks.com