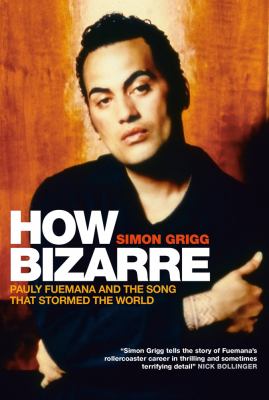 How bizarre : Pauly Fuemana and the song that stormed the world / Simon Grigg.

Pauly Fuemana of the group Ōtara Millionaires Club (OMC) was the charismatic singer and creator, with producer Alan Jansson, of the hit record How Bizarre . After the record's release in 1995 it stormed to number one in New Zealand, Australia, Canada and European countries and Fuemana appeared twice on Britain's top-rated TV show Top of the Pops . It was named Single of the Year at the New Zealand Music Awards and remains the country's most internationally successful indie record of all time, having sold over 4 million copies and appeared on at least 100 compilations. Despite the song's phenomenal success, Fuemana was deeply troubled and found fame hard to handle. His friend, mentor and music publisher Simon Grigg gives a riveting blow-by-blow account of the singer's life and the song's beginnings, runaway success, and effect on Fuemana and the people around him. Along the way there are fascinating and often shocking insights into the ruthlessness of the music industry. This is an inside story never told before.

"In this book his music publisher, Simon Grigg, who was part of the story from the beginning and who accompanied Fuemana through the subsequent events, including on many of his overseas trips, tells the blow-by-blow story of the song's creation, its huge success and its effect on the artist and his family. In the process the book becomes much more: a fascinating, sometimes shocking, insight into how the music industry works" --Publisher information.