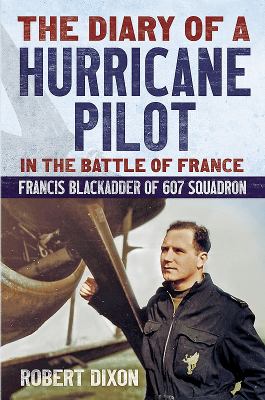 The diary of a Hurricane pilot in the Battle of France : Francis Blackadder of 607 Squadron / edited by Robert Dixon.

The RAF and their new Hurricane fighter was first put through its paces in the ill-feted Battle of France. Robert Dixon first came across the diary of William Francis Blackadder when carrying out research on 607 Squadron, the squadron Blackadder flew with. The diary begins in August 1939 when the squadron was at its annual summer camp at Abbotsinch and it takes us through the last days of peace with the excitement of a coming war. 607 Squadron was one of two Auxiliary Air Force squadrons to be posted to France. The diary takes us through the 'Phoney War' and the worst winter on record. Flying the obsolete Gladiator, a frustrated Blackadder remarked, 'We fly patrols in silly, bloody biplanes.' This beautifully illustrated book shows the aerial war as it really was as the outnumbered RAF fought dogfights high over France. This superb book highlights in realistic detail the tense drama, hopelessness and ultimate defeat against Hitler's Luftwaffe. As in the word of Winston Churchill: 'The Battle France is over. I expect the Battle of Britain is about to begin.'