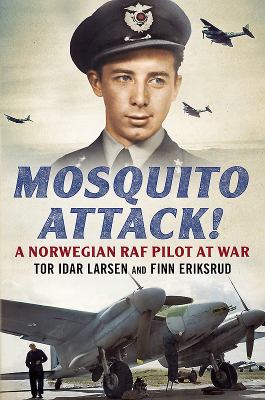 In 1943, Norwegians formed their third squadron flying under RAF command: No. 333 Squadron. One of the chosen few to fly 'The Wooden Wonder', the revolutionary and deadly de Havilland Mosquito, was 21-year-old Finn Eriksrud. Eriksrud had traveled all the way across the world to end up in Scotland to fly the Mosquito after a hazardous escape from Norway. He would now fly over his native country on extremely dangerous low-level reconnaissance and patrol missions from May 1943 onwards. By December 1943, all of the original Mosquito pilots were either killed from flying accidents or shot down over Norway. That same month was Eriksrud's final mission with No. 333 Squadron. He was forced to ditch his Mosquito off the coast of Norway where he was taken prisoner alongside his navigator Erling Victor Johanssen. Eriksrud had not gone down without a fight. During those dangerous months, he had shot down a Junkers Ju 88, his navigator taking a snapshot before the German bomber crashed in flames.

"[Larsen] went through page after page taking notes of names, places, ships, and towns Eriksrud mentions but does not explain, and later researched them, trying to put the pieces together."--Page 10.