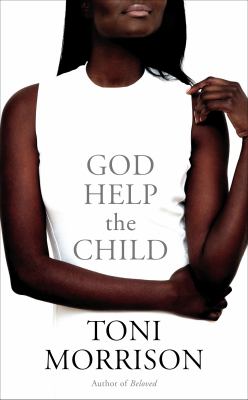 Genre/Form: Domestic fiction.DDC classification: 813/.54 Summary: Spare and unsparing, God Help the Child--the first novel by Toni Morrison to be set in our current moment--weaves a tale about the way the sufferings of childhood can shape, and misshape, the life of the adult. At the center: a young woman who calls herself Bride, whose stunning blue-black skin is only one element of her beauty, her boldness and confidence, her success in life, but which caused her light-skinned mother to deny her even the simplest forms of love. There is Booker, the man Bride loves, and loses to anger. Rain, the mysterious white child with whom she crosses paths. And finally, Bride's mother herself, Sweetness, who takes a lifetime to come to understand that "what you do to children matters. And they might never forget."
Tags from this library: No tags from this library for this title. Log in to add tags.
Fiction notes: Click to open in new window

" What you do to children matters. And they might never forget' Sweetness wants to love her child, Bride, but she struggles to love her as a mother should. Bride, now glamorous, grown up, ebony-black and panther-like, wants to love her man, Booker, but she finds herself betrayed by a moment in her past, a moment borne of a desperate burn for the love of her mother. Booker cannot fathom Bride's depths, with his own love-lorn past bending him out of shape. Can they find a way through the damage wrought on their blameless childhood souls, to light and happiness, free from pain? Toni Morrison's fierce and provocative new novel exposes the damage adults wreak on children, and how this echoes through the generations."

Spare and unsparing, God Help the Child--the first novel by Toni Morrison to be set in our current moment--weaves a tale about the way the sufferings of childhood can shape, and misshape, the life of the adult. At the center: a young woman who calls herself Bride, whose stunning blue-black skin is only one element of her beauty, her boldness and confidence, her success in life, but which caused her light-skinned mother to deny her even the simplest forms of love. There is Booker, the man Bride loves, and loses to anger. Rain, the mysterious white child with whom she crosses paths. And finally, Bride's mother herself, Sweetness, who takes a lifetime to come to understand that "what you do to children matters. And they might never forget."

In her 11th novel, Morrison (Beloved) relates a story-a fable, really-about childhood abuse, family, history, and time. Lula Ann Bridewell, born with blue-black skin, was rejected by her light-skinned mother, Sweetness. As an adult, Lula Ann (who renames herself Bride) is successful and loved by her boyfriend Booker. All this changes, however, when Bride decides to make amends for a terrible lie she told as a child. Morrison's storytelling is always powerful, but in this novel that power is muted. There are moments of lyric wonder, beautifully conveyed by the author's own narration, but too often the descriptions of characters (except for Bride and Sweetness) seem short, even truncated, and there are times when the reader wishes that the touches of magic realism that appear would become more integral to the overall plot. VERDICT Even with these flaws, the storytelling accumulates a strength and drive that are distinctive to Morrison, making this, in the end, a worthwhile listen. ["There are some moves here that may seem obvious, but the pieces all fit together seamlessly in a story about beating back the past, confronting the present, and understanding one's worth": LJ 3/15/15 starred review of the Knopf hc.]-Wendy -Galgan, St. Francis Coll., Brooklyn © Copyright 2015. Library Journals LLC, a wholly owned subsidiary of Media Source, Inc. No redistribution permitted.

Morrison's latest novel finds adults struggling to overcome the emotional scars of childhood. The story begins with the birth of Lula Ann Bridewell, a deep blue-black-skinned baby whose light-skinned mother cannot stand to touch her. Grown-up Lula Ann transforms herself into Bride, a glamorous fashion executive who still yearns for love and acceptance in her personal life. Amid preparations for the launch of her signature cosmetics line, Bride offers a gift bag of cash and cosmetics to parolee Sofia Huxley, the kindergarten teacher Bride accused of sexual abuse 15 years before. Sofia's angry rejection of Bride's present, coinciding with the departure of Bride's lover, inspires such self-doubt that Bride fears regressing into Lula Ann. Morrison reads with tremendous insight and empathy for the characters, vividly bringing them to life. Every emotional nuance-yearning, bewilderment, anger, love, self-empowerment-resonates in her voice, making this a powerful audio experience that elevates Morrison's already remarkable and memorable prose. A Knopf hardcover. (Apr.) © Copyright PWxyz, LLC. All rights reserved.

This novel is brief for Morrison brief for most any major novelist. There is a lot of foundational information for readers to quickly learn in the opening pages. Brevity for Morrison doesn't mean cutting out lots of plot development and character presentation. It means that the usual amount of that kind of elaboration is condensed in fewer pages than what would be expected. So there is no wading into the story and gathering at a measured pace all the important clues about people and events that the reader ordinarily has time to absorb and process. The theme can be gleaned from the title. This is a novel about how psychological damage in childhood influences the way an adult leads his or her life. Four voices, four characters the primary one being Bride, born so dark-skinned that her light-skinned mother was loathe to even touch her give solo articulation to their hurts when young and the consequent dented versions of their adult selves. Now, the strength of the novel and it does indeed gain compelling strength is that it becomes a swirl of deep emotions, sucking the reader in, which is good, because the point of the novel is to empathize as deeply as possible with what these characters experience. High-Demand Backstory: A new Morrison novel? Stock up. Enough said.--Hooper, Brad Copyright 2015 Booklist

Brutality, racism and lies are relieved by moments of connection in Morrison's latest.A little girl is born with skin so black her mother will not touch her. Desperate for approval, to just once have her mother take her hand, she tells a lie that puts an innocent schoolteacher in jail for decades. Later, the ebony-skinned girl will change her name to Bride, wear only white, become a cosmetics entrepreneur, drive a Jaguar. Her lover, a man named Booker, also bears a deep scar on his soulhis older brother was abducted, tortured and murdered by a pedophilic serial killer. This is a skinny, fast-moving novel filled with tragic incidents, most sketched in a few haunting sentences: "The last time Booker saw Adam he was skateboarding down the sidewalk in twilight, his yellow T-shirt fluorescent under the Northern Ash trees." When Bride's falsely accused teacher is released from prison, there's a new round of trouble. Booker leaves, Bride goes after himand ends up in the woods, recovering from a car accident with hippie survivalists who have adopted a young girl abused by her prostitute mother. Meanwhile, Bride is anxiously watching her own body metamorphose into that of a childher pubic hair has vanished, her chest has flattened, her earlobes are smooth. As in the darkest fairy tales, there will be fire and death. There will also be lobster salad, Smartwater and Louis Vuitton; the mythic aspects of this novel are balanced by moments like the one in which Bride decides that the song that most represents her relationship with Booker is "I Wanna Dance with Somebody." A chilling oracle and a lively storyteller, Nobel winner Morrison continues the work she began 45 years ago with The Bluest Eye. Copyright Kirkus Reviews, used with permission.
More book reviews at iDreamBooks.com