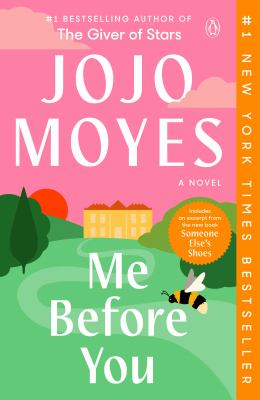 Me before you / JoJo Moyes.

From the #1 New York Times bestselling author of The Giver of Stars, discover the love story that captured over 20 million hearts in Me Before You , After You , and Still Me .

They had nothing in common until love gave them everything to lose . . .

Louisa Clark is an ordinary girl living an exceedingly ordinary life--steady boyfriend, close family--who has barely been farther afield than their tiny village. She takes a badly needed job working for ex-Master of the Universe Will Traynor, who is wheelchair bound after an accident. Will has always lived a huge life--big deals, extreme sports, worldwide travel--and now he's pretty sure he cannot live the way he is.

Will is acerbic, moody, bossy--but Lou refuses to treat him with kid gloves, and soon his happiness means more to her than she expected. When she learns that Will has shocking plans of his own, she sets out to show him that life is still worth living.

A Love Story for this generation and perfect for fans of John Green's The Fault in Our Stars , Me Before You brings to life two people who couldn't have less in common--a heartbreakingly romantic novel that asks, What do you do when making the person you love happy also means breaking your own heart?

Prequel to: After you. -Lou Clark knows lots of things. She knows how many footsteps there are between the bus stop and home. She knows she likes working in The Buttered Bun tea shop and she knows she might not love her boyfriend Patrick. What Lou doesn't know is she's about to lose her job or that knowing what's coming is what keeps her sane.

Lou Clark knows lots of things. She knows how many footsteps there are between the bus stop and home. She knows she likes working in The Buttered Bun tea shop and she knows she might not love her boyfriend Patrick. What Lou doesn't know is she's about to lose her job or that knowing what's coming is what keeps her sane.

In Moyes's (The Last Letter from Your Lover) disarmingly moving love story, Louisa Clark leads a routine existence: at 26, she's dully content with her job at the cafe in her small English town and with Patrick, her boyfriend of six years. But when the cafe closes, a job caring for a recently paralyzed man offers Lou better pay and, despite her lack of experience, she's hired. Lou's charge, Will Traynor, suffered a spinal cord injury when hit by a motorcycle and his raw frustration with quadriplegia makes the job almost unbearable for Lou. Will is quick-witted and sardonic, a powerhouse of a man in his former life (motorcycles; sky diving; important career in global business). While the two engage in occasional banter, Lou at first stays on only for the sake of her family, who desperately needs the money. But when she discovers that Will intends to end his own life, Lou makes it her mission to persuade him that life is still worth living. In the process of planning "adventures" like trips to the horse track-some of which illuminate Lou's own minor failings-Lou begins to understand the extent of Will's isolation; meanwhile, Will introduces Lou to ideas outside of her small existence. The end result is a lovely novel, both nontraditional and enthralling. Agent: Sheila Crowley, Curtis Brown. (Dec.) (c) Copyright PWxyz, LLC. All rights reserved.

In The Last Letter from Your Lover (2011), Moyes presented a heavily plotted novel that spanned decades and featured parallel romances. Her newest work dials down the intricacy, and the result is a far more intimate novel. Moyes introduces us first to Will Traynor, a formerly high-flying, thrill-seeking executive now confined to a wheelchair as a quadriplegic. Twentysomething Louisa Lou Clark has been hired as his caretaker, despite a total lack of experience. As the prickly Will and plainspoken Lou gradually warm to each other, she learns that the six-month length of her contract coincides with the amount of time Will has agreed, for his parents' sake, to postpone his planned assisted suicide, a subject Moyes treats evenhandedly. Armed with this information, Lou sets about creating adventures for Will, hoping to give him a reason to live. Simultaneously, Will encourages Lou to expand the expectations of what her life could be. All signs point to romance and a happy ending for the pair, but Moyes has something more heartbreakingly truthful in mind: Sometimes love isn't enough.--Wetli, Patty Copyright 2010 Booklist

A young woman finds herself while caring for an embittered quadriplegic in this second novel from British author Moyes (The Last Letter from Your Lover, 2011). Louisa has no apparent ambitions. At 26, she lives with her working-class family (portrayed with rollicking energy) in a small English town, carries on a ho-hum relationship with her dull boyfriend and works at a local cafe. Then, the cafe closes, and she must find a job fast to ease her family's financial stress. Enter Will Traynor, a former world traveler, ladies' man and business tycoon who's been a quadriplegic since a traffic accident two years ago. Will's magistrate mother hires Louisa at a relatively hefty salary to be Will's caregiver and keep him company for the next six months--easygoing Nathan gives him his medical care and physiotherapy--but really Will's mother wants Louisa to watch him so he doesn't try to hurt himself. Will, once handsome and powerful, is not only embittered, but in constant pain. He has some use of one hand but is dependent on others for his basic needs, and recovery is not possible. Louisa, who can't help speaking her mind and dresses thrift-store eccentric, thinks he hates her, but no surprise, Louisa's sprightly, no-nonsense charms win him over. He even cheers her up on occasion. When Louisa overhears Will's mother talking to his sister, she realizes that the Traynors have reluctantly agreed to let Will commit suicide at a facility in six months. Louisa decides to convince him to stay alive with a series of adventures. Meanwhile, Will, who senses something in her past has made Louisa fearful of adventure, is trying to broaden her experience through classical music and books. Their feelings for each other deepen. But Louisa is not Jane Eyre, and Will is not Mr. Rochester in a wheelchair, so don't expect an easy romantic ending. Despite some obviousness in the storyline, this is uplift fiction at its best, with fully drawn characters making difficult choices.]] Copyright Kirkus Reviews, used with permission.
More book reviews at iDreamBooks.com