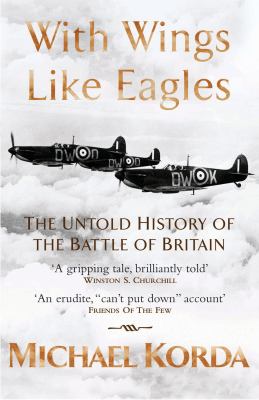 With wings like eagles : a history of the Battle of Britain / Michael Korda.

It was the most intense and critical struggle of World War II. Fought by a handful of young men, some as young as 18, it was the Battle of Britain. In this history, Michael Korda, who served in the RAF himself, tells the complete story, witnessed through the tales of pilots, ground crews, and commanders on both sides.

Korda (Ike), a skilled popular historian, here retells the familiar story of the Battle of Britain as a largely political tale, emphasizing the background, personalities, and preparation for the battle instead of the fighting. Strongly recommended for public and college libraries as a literate and readable supplement to existing books on the subject, e.g., John Lukacs's Five Days in London: May 1940, but it should not be the only source on the battle. (c) Copyright 2010. Library Journals LLC, a wholly owned subsidiary of Media Source, Inc. No redistribution permitted.

The Battle of Britain has become as much myth as history. Korda (Ulysses S. Grant), former editor-in-chief of Simon & Schuster, gives its story fresh life with the expertise of an established popular historian and the polish of a master narrator. In the summer of 1940, Britain stood alone against the Third Reich, which had quickly overrun Western Europe and seemed poised to finish the job. All that blocked the Nazis were a couple of thousand fighter pilots and their commander, Air Chief Marshal Sir Hugh Dowding, the story's hero. Dowding fought to build Spitfires and Hurricanes, and trained men to fly them. He set up the radar system and the observer networks that kept watch for German raids. In the face of initial defeats, he husbanded his resources for a greater battle he knew would come. Korda is no triumphalist, demonstrating the mistakes, misunderstandings and simple cussedness that threatened the chances for a British victory. But Dowding's Brylcreem Boys, nicknamed for their favorite styling gel, succeeded against an enemy no less brave and skilled. 7 pages of color and 16 pages of b&w photos. (Jan. 6) (c) Copyright PWxyz, LLC. All rights reserved

September 15, the UK's Battle of Britain Day, concludes Korda's narrative of the famous World War II battle. The date is so honored because in retrospect it was recognized as the Nazis' final attempt to defeat Fighter Command and clear the way for invasion. The commander of Fighter Command, Hugh Dowding, received no plaudits for victory; rather, he was put out to pasture within weeks. Restoring Dowding's achievement, Korda delves into preparations Dowding undertook in the late 1930s to create an integrated air defense system. In addition to lauding Dowding's administrative decisions, Korda describes how his resistance to Churchill, who wanted to dispatch British fighters to save a collapsing France, probably preserved the margin of strength Fighter Command needed against the Luftwaffe. Vital though the Dowding factor may be, history readers invariably choose a Battle of Britain book for its account of Dowding's pilots, whose aerial victories and losses Korda ably dramatizes, and for its photographs, of which this volume boasts 24 pages' worth. All in all, a natural pick for the WWII collection.--Taylor, Gilbert Copyright 2008 Booklist
More book reviews at iDreamBooks.com