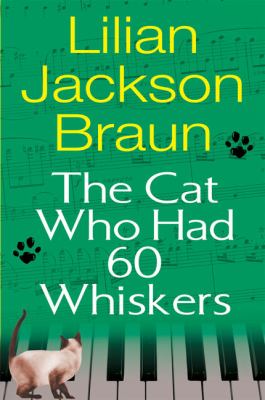 The cat who had 60 whiskers / Lilian Jackson Braun.

In the 29th installment of Brauns beloved, bestselling Cat Who . . . series, all of Moose County is in an uproar following vast inheritances from wealthy old families. Only Cool Koko knows whats happening--and hes not telling.

Diehard fans will best appreciate Braun's meandering 29th "Cat Who..." mystery (after 2006's The Cat Who Dropped a Bombshell). Series hero Jim "Qwill" Qwilleran, columnist for the Moose County Something in remote Pickax City, Mich., gets involved in the local literary club, a new senior center and an absurdist play called The Cat Who Was Elected Dogcatcher. When Polly Duncan, "the chief woman in his life," goes off to Paris, Qwill is left without a companion for his various social outings. Incidental criminal activities include arson, missing funds and death by bee sting. Siamese cats Koko and Yum Yum add the usual feline fun. (Jan.) (c) Copyright PWxyz, LLC. All rights reserved

The twenty-ninth in the immensely popular Cat Who series won't win the series any new fans. As usual, Moose County, 400 miles north of everywhere, is the setting, and mustachioed Jim (Quill ) Quilleran, columnist for the Moose County Something, and his cats, Koko and Yum Yum, are the principals, though Yum Yum serves a peripheral role here, leaving the psychic Siamese Koko in full command, foretelling the coming of phone calls and issuing curdling howls when someone suffers a violent death. In this episode, the Old Hulk, which is being developed as a senior center, mysteriously burns to the ground. Meanwhile, a young woman dies from a bee sting--it could be murder--and Quill's lady friend, Polly, goes to Paris and decides to stay there. Then Quill's beloved apple-barn residence is also destroyed by fire. Unfortunately, these story threads tend to peter out with no resolution, and the cat characterizations, usually a strong point, seem a bit forced, making it difficult to see them as real felines, albeit sentient ones. None of this will matter all that much to the series faithful, however, who bring fully formed senses of the characters to each adventure. A welcome chance to revisit Moose County for regulars, then, but don't expect passers-by to stick around. --Sally Estes Copyright 2006 Booklist
More book reviews at iDreamBooks.com