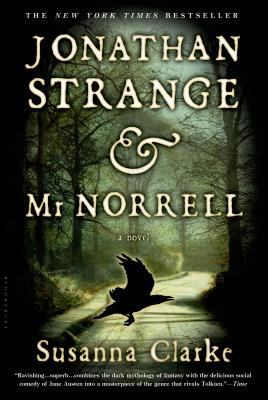 | York (England) -- FictionGenre/Form: Historical fiction. | Fantasy fiction.DDC classification: 823.92
Contents:
Mr Norrell -- Jonathan Strange -- John Uskglass.
Summary: "Susanna Clark's brilliant first novel is an utterly compelling epic tale of nineteenth-century England and the two very different magicians who, as teacher and pupil and then as rivals, emerge to change its history. In the year 1806, in the throes of the Napoleonic Wars, most people believe magic to be dead in England - until the reclusive Mr Norrell of Hurtfew Abbey reveals his powers, and becomes a celebrity overnight. Soon, another practicing magician emerges: the young, handsome, and daring Jonathon Strange. He becomes Norrell's student, and the two join forces in the war against France. But as Strange is increasingly drawn to the wildest, most perilous forms of magic, he risks sacrificing not only his partnership with Norrell, but everything else that he holds dear. An international bestseller published in 31 countries, Jonathon Strange & Mr Norrell is a tour de force that has captured the imagination of readers worldwide." --Publisher description.
Tags from this library: No tags from this library for this title. Log in to add tags.
Fiction notes: Click to open in new window

In the Hugo-award winning, epic New York Times Bestseller and basis for the BBC miniseries, two men change England's history when they bring magic back into the world.

In the midst of the Napoleonic Wars in 1806, most people believe magic to have long since disappeared from England - until the reclusive Mr. Norrell reveals his powers and becomes an overnight celebrity.

Yet the cautious, fussy Norrell is challenged by the emergence of another magician, the brilliant novice Jonathan Strange. Young, handsome, and daring, Strange is the very opposite of Norrell. He becomes Norrell's student, and they join forces in the war against France. But Strange is increasingly drawn to the wildest, most perilous forms of magic, straining his partnership with Norrell, and putting at risk everything else he holds dear.

Susanna Clarke's brilliant first novel is an utterly compelling epic tale of nineteenth-century England and the two magicians who, first as teacher and pupil and then as rivals, emerge to change its history.

"Susanna Clark's brilliant first novel is an utterly compelling epic tale of nineteenth-century England and the two very different magicians who, as teacher and pupil and then as rivals, emerge to change its history. In the year 1806, in the throes of the Napoleonic Wars, most people believe magic to be dead in England - until the reclusive Mr Norrell of Hurtfew Abbey reveals his powers, and becomes a celebrity overnight. Soon, another practicing magician emerges: the young, handsome, and daring Jonathon Strange. He becomes Norrell's student, and the two join forces in the war against France. But as Strange is increasingly drawn to the wildest, most perilous forms of magic, he risks sacrificing not only his partnership with Norrell, but everything else that he holds dear. An international bestseller published in 31 countries, Jonathon Strange & Mr Norrell is a tour de force that has captured the imagination of readers worldwide." --Publisher description.

This book's rather lackluster title does a grave disservice to a story of tremendous imagination and exquisite style. First novelist Clarke recounts the struggle of two English magicians to return their craft to the level of professional respect it commanded during the medieval golden age. It is 1806, and with the Napoleonic Wars raging, England calls upon Mr. Norrell, a prudent, practiced magician-scholar, to fend off the little general once and for all. Then along comes Jonathan Strange, a handsome and reckless aristocrat who tries his hand at magic and quickly excels. Admirers of Austen will find much to entertain them as they read of the magicians' travails (Norrell takes on Strange as a pupil), English economic ills, and the much darker, more dangerous forces of the Faerie world. This tour de force is sure to appeal to fans of Charles Palliser and Diana Gabaldon and anyone who appreciates a distinctive voice. Highly recommended for all public libraries.--Cynthia Johnson, Cary Memorial Lib., Lexington, MA (c) Copyright 2010. Library Journals LLC, a wholly owned subsidiary of Media Source, Inc. No redistribution permitted. All rights reserved.

The drawing room social comedies of early 19th-century Britain are infused with the powerful forces of English folklore and fantasy in this extraordinary novel of two magicians who attempt to restore English magic in the age of Napoleon. In Clarke's world, gentlemen scholars pore over the magical history of England, which is dominated by the Raven King, a human who mastered magic from the lands of faerie. The study is purely theoretical until Mr. Norrell, a reclusive, mistrustful bookworm, reveals that he is capable of producing magic and becomes the toast of London society, while an impetuous young aristocrat named Jonathan Strange tumbles into the practice, too, and finds himself quickly mastering it. Though irritated by the reticent Norrell, Strange becomes the magician's first pupil, and the British government is soon using their skills. Mr. Strange serves under Wellington in the Napoleonic Wars (in a series of wonderful historical scenes), but afterward the younger magician finds himself unable to accept Norrell's restrictive views of magic's proper place and sets out to create a new age of magic by himself. Clarke manages to portray magic as both a believably complex and tedious labor, and an eerie world of signs and wonders where every object may have secret meaning. London politics and talking stones are portrayed with equal realism and seem indisputably part of the same England, as signs indicate that the Raven King may return. The chock-full, old-fashioned narrative (supplemented with deft footnotes to fill in the ignorant reader on incidents in magical history) may seem a bit stiff and mannered at first, but immersion in the mesmerizing story reveals its intimacy, humor and insight, and will enchant readers of fantasy and literary fiction alike. Agent, Jonny Geller. (Oct.) Forecast: A massive push by Bloomsbury has made this one of the most anticipated novels of the season. It's convenient to pigeonhole it as Harry Potter for grownups-and grown-up readers of J.K. Rowling will enjoy it-but its deep grounding in history gives it gravitas as well as readability. 200,000 first printing; rights sold in 14 countries. (c) Copyright PWxyz, LLC. All rights reserved

Adult/High School-This delightful first novel exerts a strong and seductive pull on readers who might otherwise balk at its length. Like Philip Pullman's work, it is dark, deep, and challenging. It compares dead-on with Jane Austen's novels, and YAs who have underappreciated her wit may find it delicious when applied to magicians. Clarke even tosses in a bit of Dickens and Hardy-with great characterization, subplots, and a sense of fate bearing down hard on us. At stake is the future of English magic, which has nearly dwindled to all theory by the early 1800s, after centuries of prominence. When the book opens, only the reclusive and jealous Gilbert Norrell is practicing. Enter Jonathan Strange, a natural who has never studied magic formally. Norrell resents, then adopts Strange as a pupil whose growth he insists on controlling until the two come to the impasse that nearly leads them to destroy one another. Strange champions the 12th century's "Raven King" as the greatest magician in English history and hopes to summon him from Faerie, an alternate world. Norrell is determined to erase both from English memory-to hide the fact that he himself made a bargain with a fairy that has cost three people their lives, though their hearts go on dismally beating. Expertly written and imagined, the book is a feast for fans of fantasy, historical novels, or simply fabulously engrossing reads.-Emily Lloyd, formerly at Rehoboth Beach Public Library, DE (c) Copyright 2010. Library Journals LLC, a wholly owned subsidiary of Media Source, Inc. No redistribution permitted.

It's surprising that this first novel works at all. Readers have to accept an especially fanciful premise but, as it quickly becomes obvious, acceptance presents no difficulty. This novel took 10 years to research and write, according to publicity material; for readers at least, the author's arduous task results in a smashing success--it's an exceptionally compelling, brilliantly creative, and historically fine-tuned piece of work. The brilliance of the novel lies in how Clarke so completely and believably creates a world within a world: the outside world being early-nineteenth-century England, as Napoleon the eagle looms over all of Europe; the inner world being the community of English magicians. At the story's outset, magic in the land is moribund; magicians, who convene in various convocations, did not want to see magic done; they only wished to read about it in books. But circumstances arise that cause magic again to become manifest, not simply discussed as an academic subject; this resurrection has extensive consequences for the heretofore stately state of magic in the English realm. History and fantasy form a beautiful partnership in this detailed, authentic, and heartfelt novel, which is part fairy tale and part epic. The inner world it creates is completely furnished and credible; the outside world is exact in its accuracy. Written in a style correlative to the writing and speaking of the time, which the reader will come to find quite mellifluous, this novel is, in a word, charming. Comparisons to Harry Potter are inevitable but not distracting, for this novel stands on its own. --Brad Hooper Copyright 2004 Booklist

Rival magicians square off to display and match their powers in an extravagant historical fantasy being published simultaneously in several countries, to be marketed as Harry Potter for adults. But English author Clarke's spectacular debut is something far richer than Potter: an absorbing tale of vaulting ambition and mortal conflict steeped in folklore and legend, enlivened by subtle characterizations and a wittily congenial omniscient authorial presence. The agreeably convoluted plot takes off with a meeting in of "gentleman-magicians" in Yorkshire in 1806, the time of the Napoleonic Wars. The participants' scholarly interests are encouraged by a prophecy "that one day magic would be restored to England by two magicians" and would subsequently be stimulated by the coming to national prominence of Gilbert Norrell, a fussy pedant inclined to burrow among his countless books of quaint and curious lore, and by dashing, moody Jonathan Strange, successfully employed by Lord Wellington to defeat French forces by magical means. Much happens. A nobleman's dead wife is revived but languishes in a half-unreal realm called "Lost-hope"--as does Stephen Black, the same nobleman's black butler, enigmatically assured by a nameless "gentleman with thistle-down hair" that he (Stephen) is a monarch in exile. Clarke sprinkles her radiantly readable text with faux-scholarly (and often hilarious) footnotes while building an elaborate plot that takes Strange through military glory, unsuccessful attempts to cure England's mad king, travel to Venice and a meeting with Lord Byron, and on a perilous pursuit of the fabled Raven King, former ruler of England, into the world of Faerie, and Hell ("The only magician to defeat Death !"). There's nothing in Tolkien, Mervyn Peake, or any of their peers that surpasses the power with which Clarke evokes this fabulous figure's tangled "history." The climax, in which Strange and Norrell conspire to summon the King, arrives--for all the book's enormous length--all too soon. An instant classic, one of the finest fantasies ever written. Copyright ©Kirkus Reviews, used with permission.
More book reviews at iDreamBooks.com