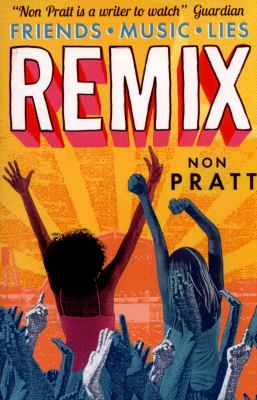 Boys don't break your heart; best friends do. A funny touching story about friendship by the critically acclaimed Non Pratt, author of Trouble.Three days. Two best mates. One music festival. Zero chance of everything working out. From the author of Trouble comes a novel about boys, bands and best mates. "Non Pratt is a writer to watch" - The Guardian

Though British teenagers Kaz and Ruby are reeling from breakups, both of them are determined to enjoy their last weekend together before some big transitions. With Ruby's brother leaving for America and wild child Ruby facing the possibility of being held back at school, the two best friends head to Remix, a music festival featuring their favorite band, Goldintone. Pratt (Trouble) viscerally illustrates the idiosyncrasies of the music festival world with its grungy bathrooms, mosh pits, and random encounters with strangers. Kaz and Ruby have always been there for each other, but their relationship hasn't been equal: according to mild-mannered Kaz, "Where Ruby leads, I follow." When Kaz meets a new friend who threatens to take Ruby's place and Ruby receives attention from a famous rock star, they both have to decide what is most important and whether their friendship can survive the changes in store. Writing in the teens' alternating voices, Pratt easily shifts between friendly late-night campfires and profound moments of realization, including an affecting consideration of sex without love, en route to an emotional and satisfying conclusion. Ages 14-up. Agent: Jane Finigan, Lutyens & Rubinstein. (July) © Copyright PWxyz, LLC. All rights reserved.

Gr 10 Up-Kaz and Ruby are best friends on their way to a three-day music festival called Remix. Kaz (short for Karizma) is the responsible one; she gets good grades, doesn't drink, and has the perfect boyfriend. Except Mr. Perfect, Tom, dumped Kaz and she is not over it. And now Tom is at the festival with his new girlfriend. Ruby is a tough girl who parties hard and whose grades are so bad that she may have to repeat the school year. Her recent relationship with Stu, doomed from the start, imploded when he cheated on her. And Stu is at the festival, too. The next three days take the girls through fights, miscommunications, breakups, makeups, sexual experiences, fake tattoos, music, and so much more. Very short paragraphs alternate first-person perspectives between Kaz and Ruby. The jump between characters can be a bit confusing at first, but teens will quickly acclimate. The girls drink and have sex (and face realistic consequences for both) and are ultimately there for each other. The importance of friendship is the message Kaz and Ruby learn over the weekend-and one that will resonate with teens. VERDICT A good choice for mature reluctant readers; purchase where gritty YA circulates well.-Tara Kehoe, New Jersey State Library Talking Book and Braille Center, Trenton © Copyright 2016. Library Journals LLC, a wholly owned subsidiary of Media Source, Inc. No redistribution permitted.

Best friends Kaz and Ruby are attending the Remix Festival to see their favorite band, Goldintone, and hopefully meet cute guys in the process. Trouble looms when their ex-boyfriends Tom (for whom Kaz still pines) and Stu (for whom Ruby vows eternal hatred) show up. Can they help each other make sensible decisions, or will they stumble back into old, self-destructive habits? Using the girls' alternating POVs and the chaotic backdrop of a music festival, Pratt portrays the complexities of a friendship and how it matures and changes, weaving a tapestry of situations that imbues Kaz and Ruby with a shared history that feels alive. Pratt's strength is allowing her characters to make mistakes (sometimes innocently, sometimes selfishly) and then grapple with the consequences. Themes germane to teens sex, drugs, relationships, future aspirations are presented without sugarcoating the difficulty of navigating the adult world for the first time. A fun, fast-paced, and ultimately moving read that explores the nuances of friendship between young women.--Suarez, Reinhardt Copyright 2016 Booklist

In this breezy contemporary novel, wild child Ruby and straight-laced Kaz are best friends recovering from recent break-ups. In alternating narration, Kaz and Ruby detail their trip to a music festival, where sex, drinking, and exes stir up trouble. Although the ensuing drama threatens the British teens' tight bond, their conflicts are wrapped up a bit too neatly by the end of the long weekend. (c) Copyright 2017. The Horn Book, Inc., a wholly owned subsidiary of Media Source, Inc. No redistribution permitted.

English best friends Kaz and Ruby, in post-breakup recovery mode (from Tom and Stu, respectively), head to Remix, a three-day music festival, to reboot.White Ruby's older brother, Lee, was supposed to look after them, but he's distracted with world travel plans and his fracturing romance with Owen. Biracial Kaz knew Tom would be at Remix, but his new girlfriend, Lauren, is a surprise. Running into Stu distracts Ruby from her tough choice: whether to repeat a year at St. Felicity's, in order to continue on a university-bound track with Kaz, or leave school and find a new path. The girls chase the guys and follow each other through chaotic hordes of campers and celebrity hounds at the teeming festival, where alcohol in vast quantities is the drug of choice. The hot, mainly male stars fans have come to seeand hopefully bedare as much a draw as the music. Through ups and downs, the girls' friendship is less about mutual empowerment than offering a shoulder to cry on or remedy for a hangover after getting dumped or drunk. Characterization is uneven. Stu and Ruby are a lively duo, but despite her multicultural surname (Asante-Blake) and hair, Kaz is culturally monochrome. Belying the contemporary setting and multitudinous references to snogging, condoms, and sex toys, the female characters' passive to downright submissive behaviorand unsettlingly retro disparity in gender roles overallseems drawn straight from the 1950s.Entertaining, witty, and often funnybut also oddly old-fashioned. (Fiction. 14-18) Copyright Kirkus Reviews, used with permission.
More book reviews at iDreamBooks.com