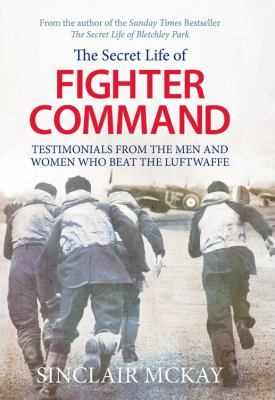 The secret life of Fighter Command : the men and women who beat the Luftwaffe / by Sinclair McKay.

During the dark days of 1940, when Britain faced the might of Hitlerâ?s armed forces alone, the RAF played an integral role in winning the Battle of Britain against the Luftwaffe, thus ensuring the countryâ?s safety from invasion. The men and women of Fighter Command worked tirelessly in air bases scattered throughout the length and breadth of Britain to thwart the Nazi attacks; The Secret Life of Fighter Command tells their story.

From setting up the ground-breaking radar systems along the coast of the Southeast of England, to the distribution of spotters of bombing waves coming along the Thames Estuary, the boffins who designed and built the guidance and detection structures to organise a winning defence umbrella, to the Wrens who plotted enemy movements and then conveyed this to the various RAF squadrons stationed in the UKâ?s zonal defence system ­­­â? all of them played a part in maintaining the security over Britain. Through exclusive interviews with various members of this unique and world famous organisation, bestselling author Sinclair McKay tells the human story of how Britain survived the Nazi onslaught and enabled our Hurricanes and Spitfires to triumph over the German airforce.