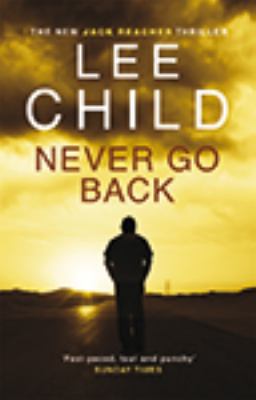 Genre/Form: Thrillers (Fiction) | Detective and mystery fiction. | Large type books.Summary: Drop-out military cop Jack Reacher has hitch-hiked his way to Virginia. His destination, the closest thing to a home he ever had: the headquarters of his old unit, the 110th Military Police. Reacher has no real reason to be here, except that he spoke to the new commanding officer on the phone. He liked Major Susan Turner's voice. But now he's arrived, she's disappeared, and things are getting weird. Accused of a sixteen-year-old homicide and co-opted back into the army, Reacher says nothing. But he's sure as hell thinking of a way out...
Tags from this library: No tags from this library for this title. Log in to add tags.
Fiction notes: Click to open in new window

First published in Great Britain in 2013 by Bantam Press.

Drop-out military cop Jack Reacher has hitch-hiked his way to Virginia. His destination, the closest thing to a home he ever had: the headquarters of his old unit, the 110th Military Police. Reacher has no real reason to be here, except that he spoke to the new commanding officer on the phone. He liked Major Susan Turner's voice. But now he's arrived, she's disappeared, and things are getting weird. Accused of a sixteen-year-old homicide and co-opted back into the army, Reacher says nothing. But he's sure as hell thinking of a way out...

In Virginia for a visit with the replacement commander of the 110th MPs, Major Susan Turner, Jack Reacher is slapped with criminal charges and a paternity suit and recalled to active duty. Major Turner is incarcerated and refuses to see him. Child (A Wanted Man) ups the stakes again-Reacher has to break himself and Turner out of jail, get to Los Angeles without being apprehended or killed, and identify the corrupt officials who framed them. Though it's part of an extended story arc, this work stands well alone. Dick Hill, who has performed all the books in the series, continues his high-quality narration here. Verdict A must-listen for Child's fans and recommended to anyone who enjoys fast-paced, action-driven thrillers.-Janet Martin, Southern Pines P.L., NC (c) Copyright 2014. Library Journals LLC, a wholly owned subsidiary of Media Source, Inc. No redistribution permitted.

Back in Child's 14th book about Jack Reacher (61 Hours), the amazingly self-sufficient, peripatetic ex-MP began thumbing his way from South Dakota to Virginia to meet Maj. Susan Turner, the CO of his old unit. It's taken him three more adventures, but he's finally made it and-no surprise-finds a mess of trouble instead of the major. Not only has she gone missing, he is immediately dragged back into the Army, facing a court martial for a crime he supposedly committed 16 years earlier. Dick Hill's voice has a properly hardboiled timbre that fits perfectly with Child's fast-flowing prose. It carries the insouciant, mildly sardonic attitude of a tough guy so aware of his capabilities that nothing intimidates or surprises him. Also of note are Hill's well-tuned voices of villainy, from the sarcastic, overconfident bullies who try using physical force on Reacher to the cold, demanding master schemers who call themselves Romeo and Juliet. By piling troubles on his noble hero and handing him a particularly knotty puzzle to solve, Child has delivered a superior series entry and Hill's rendition adds another level of enjoyment to the mayhem and mystery. A Delacorte hardcover. (Sept.) (c) Copyright PWxyz, LLC. All rights reserved.

*Starred Review* Jack Reacher, the loner thumbing his way through life, despises entanglements. So what could he possibly be doing going back to his old barracks in Washington, D.C., to take a woman to dinner? Yes, the woman, Major Susan Turner, is now the C.O. of Reacher's former unit, and, yes, he liked her voice when he talked to her on the phone in 61 Hours (2010), but, really, Reacher, what were you thinking? Naturally, when Reacher arrives on the base to ask Turner out, he discovers a whopping mess and lands in the middle of it. Turner is in the brig, and the army promptly arrests Reacher on what seems to be a trumped-up charge involving a case from decades ago. And what's this about Reacher having a daughter, of all things, whose mother is suing for child support? None of it makes sense, except that somehow it must all tie together. Nothing to do but break out of the brig, with Turner in tow, and set things right, which requires a cross-country road trip, more than a little rough stuff, and a whole lot of fretting about entanglements. Child never, ever slips. He keeps the action cranking better than anyone, but, best of all, he keeps us guessing about Reacher. Will he, of all people (Ninety-nine of us grow up to fear the howling wolf, and one grows up to envy it. I'm that guy.), really hang up his toothbrush (his only traveling accoutrement) this time? Child has spent 17 novels committing his hero to the call of the wild, and now he dangles a dinner date and a possible daughter in front of the howling wolf? Brilliant. HIGH-DEMAND BACKSTORY: Published in nearly 40 countries and more than 70 languages with more than 70 million copies in print, the Jack Reacher series is a publishing phenomenon and won't go away anytime soon.--Ott, Bill Copyright 2010 Booklist

Jack Reacher pokes a head into his old D.C. office, and things promptly go ballistic. Reacher wants to get a gander at Maj. Susan Turner, his successor as head of the 100th Military Police Special Unit. But she's been sent to Afghanistan, he's told, and he'll have to deal with her temporary replacement, Lt. Col. Morgan. Morgan's idea of dealing with Reacher is to accuse him of beating Juan Rodriguez to death 16 years ago and shortly afterward fathering Samantha, a 14-year-old whose mother, Candice Dayton, is now looking for child support. To make sure Reacher doesn't run off, as he's certainly wont to do (A Wanted Man, 2012, etc.), Morgan recalls him to active Army service and restricts him to a five-mile radius surrounding the building. Naturally, things promptly get worse. A pair of thugs offer to beat Reacher to a pulp if he doesn't go AWOL. Maj. Turner turns out to be in jail, not Afghanistan. And when her lawyer, Col. Moorcroft, is beaten into a coma a few hours after one of Reacher's own lawyers--Capt. Helen Sullivan, the one handling the Rodriguez charge--witnesses Reacher's fraught meeting with Moorcroft, Reacher is escorted to an adjoining cell in the same building. But Reacher, never one to let temporary reversals get him down, escapes from jail, taking Turner with him, and sets out to escape the District, rustle up some cash and some wheels, elude the two thugs (now four) who remain in hot pursuit, and hightail it to L.A. to satisfy himself as to whether Samantha Dayton really is his daughter. Any questions? For the pure pleasure of uncomplicated, nonstop action, no one touches Reacher, who accurately observes that "I trained myself...to turn fear into aggression."]] Copyright Kirkus Reviews, used with permission.
More book reviews at iDreamBooks.com