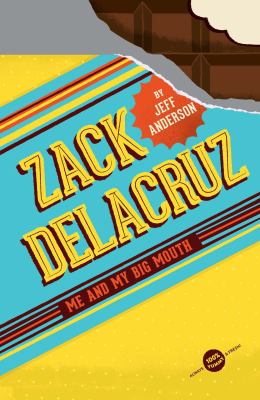 Me and my big mouth / by Jeff Anderson ; illustrations and design by Andrea Miller.

Zack Delacruz is unnoticed at his middle school--and that's just the way he likes it. But a school assembly, a typhoon of spit, and an uncharacteristic moment of bravery are all it takes to change everything. Suddenly Zack is in charge of the class fundraiser. Worse, his partner is the school's biggest bully! If they don't sell all the chocolate bars, there will be no dance for the sixth grade. Zack never wanted to be a hero, but with his classmates' hopes on the line, can he save the day?

Twelve-year-old Zack Delacruz has remained happily unnoticed at his middle school... until now. When he sees his classmate being teased by the school bully, Zack surprises everyone--including himself--by breaking out of his shell and standing up to the tormentor. Somehow this act of bravery gets Zack put in charge of the sixth-grade dance fund raiser with none other than the bully himself! Zack's situation goes from bad to worse when he learns that his best salesperson for the chocolate bar fund raiser has been EATING--not selling--her candy bars.

Twelve-year-old Zack Delacruz has remained happily unnoticed at his middle school... until now. When he sees his classmate being teased by the school bully, Zack surprises everyone--including himself--by breaking out of his shell and standing up to the tormentor. Somehow this act of bravery gets Zack put in charge of the sixth-grade dance fund raiser with none other than the bully himself! Zack's situation goes from bad to worse when he learns that his best salesperson for the chocolate bar fund raiser has been EATING--not selling--her candy bars.

Anderson's debut children's book stars sixth-grader Zack, who has perfected the art of being invisible in school-until he surprises himself by standing up to the class bully, José, also known as El Pollo Loco. Zack also finds himself forced to work with José on a fund-raising campaign: if the sixth graders sell enough candy bars, they will be allowed to attend the middle-school dance for the first time. Zack, who is also dealing with his parents' recent divorce, is a sympathetic narrator, and Anderson spiritedly renders the voices and personalities of preteens, many of Mexican descent, in a blue-collar section of San Antonio, Tex. It's somewhat hard to believe, however, that many sixth-grade boys would be motivated by the prospect of a dance, so when the fund-raising takes an unexpected twist, the sense of urgency is not especially credible. And annoying as El Pollo Loco is, he's basically harmless, which strips the bullying issue of potency. While less than compelling, the story does trace Zack's maturing and his class's bonding to a pleasantly satisfying finish. Ages 9-13. Agent: Roseanne Wells, Jennifer De Chiara Literary Agency. (Aug.) © Copyright PWxyz, LLC. All rights reserved.

Gr 3-6-Zack Delacruz prefers to stay in the background. He knows that being noticed will only lead to trouble. After a school assembly on bullying, Zack decides to stand up for a fellow classmate and in the process gets roped into being the lead fund-raiser for the school dance (if he and his classmates sell enough chocolate bars, they'll be allowed to attend the dance for the first time). Zack goes from flying under the radar to being the center of attention. Things go well until someone eats several of the boxes instead of selling them, leaving Zack to pick up the pieces. Though characterization is light, Zack's class is a diverse mix of students. Zack is a relatable narrator and embodies the middle school experience. The steady pace makes this novel a solid pick for reluctant readers, though some of the descriptions of Zack's anxieties seem to drag on. VERDICT An additional purchase for libraries looking to add more middle grade realistic fiction.-Kristyn Dorfman, The Packer Collegiate Institute, Brooklyn, NY © Copyright 2015. Library Journals LLC, a wholly owned subsidiary of Media Source, Inc. No redistribution permitted.

A bullied San Antonio sixth-grader finds himself paired with his chief tormentor for a fund-raiser in this issues-driven fiction debut. Shy Zack only wants to keep his head down. But when he's paired with hyperactive class clown José to supervise a chocolate sale that will earn his class entry to the 7th-8th Grade Dance, he is stuck with a series of mettle-testing challenges from José's refusal to do any work at all to the revelation that classmate Janie has eaten nearly $200 worth of the stock. Not only does Zack rise to each (throwing together a last-minute car wash to recoup the loss) but he even reads up on eating disorders and organizes a peer intervention for Janie. By book's end, he's a hero. Though Anderson, a former teacher, crafts a picture of school as a whirl of humiliating snaps, teachers unable to control much of anything, and clueless administrators forcing students to endure ineffectual anti-bullying assemblies, he mostly manages to keep the overall tone light and leaves his characters dancing.--Peters, John Copyright 2015 Booklist

Sixth grader Zack, struggling with his parents' divorce and middle school, has managed to remain mostly invisible until he impulsively defends a bullied classmate and becomes the target of teasing. An attempt to divert peer attention results in Zack being charged with managing a class fundraiser. Middle school insecurities, cliques, awkwardness, and embarrassment are realistically, if a bit overemotionally, portrayed. (c) Copyright 2016. The Horn Book, Inc., a wholly owned subsidiary of Media Source, Inc. No redistribution permitted.

The hot topic of middle school bullying is tackled by a San Antonio sixth-grader trying to get his class dance funded. Zack Delacruz has never stood out from the crowd; really, he's never tried to. He's been comfortable coasting along as a middle school nobody. Subtly inspired by an anti-bullying assembly, Zack makes the mistake of standing up to the school bully, Jos, by defending Janie, a movie-obsessed fat girl who spits when she talks. The fallout from this interaction results in Zack's landing on the fundraising committee for the sixth-grade dancewith Jos. After this, the novel focuses a lot more on the fundraising endeavors than the anti-bullying rhetoric, which is unfortunate, as the quest for funding just fails to capture the imagination. The book seems divided between wanting to address the serious problem of middle school bullying and to rise above the after-school-special qualities inherent in a problem novel. The result is a story that lacks any genuine pathos. There's a lot of style here: seemingly every character is assigned a cute nickname, and Zack's narration is certainly proud of itself. But the substance is an afterthought. Even at a brisk 170 pages, there isn't enough story to actively engage readers, and the lack of any subtext makes this an unsatisfying read. Forgettable. (Fiction. 10-14) Copyright Kirkus Reviews, used with permission.
More book reviews at iDreamBooks.com