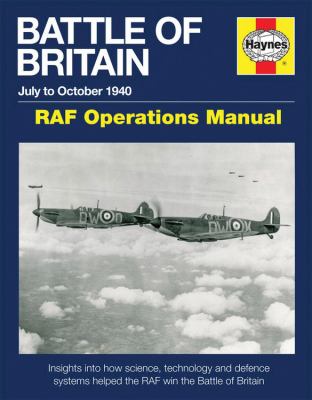 The defeat of the Luftwaffe in the Battle of Britain was thanks largely to a highly effective support network that lay behind the Spitfire and Hurricane squadrons of RAF Fighter Command. Technical, physical and organizational systems established in Britain before the war ensured that when the time came the nation was able to defend itself against any would-be aggressor.

The Battle of Britain Manual describes and illustrates the 'nuts and bolts' of how Britain - and the RAF in particular - fought back against the Luftwaffe in 1940, and won. It also shows how the Luftwaffe was organized and how it, too, rose to the challenge.

Individual chapters review the organization of the RAF and the Luftwaffe in 1940, from high command down to squadron level; the integrated air defense network (radar, fighter control, ack-ack, balloons, Observer Corps, plotting rooms and RAF airfields); the technology behind radar and radio telephony; the aircraft of the RAF and Luftwaffe, their weapons and their tactics; and useful appendices that tell you where you can see airworthy Battle of Britain aircraft, museums that feature Battle of Britain exhibits, Battle of Britain-related organizations, and useful address and websites.