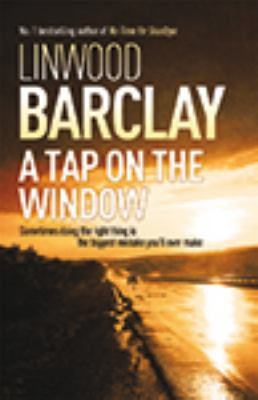 A tap on the window [text (large print)] / Linwood Barclay.

Genre/Form: Detective and mystery fiction. | Large type books.Summary: Cal Weaver reluctantly agrees to give a lift to a bedraggled-looking girl one rainy night, though he's aware that inviting a teenaged girl into his car may not be the smartest move. During their short journey, Cal discovers that Claire Sanders is not all she seems. But nothing prepares him for the consequences of trying to help her out. The next morning he finds he's gone from Good Samaritan to murder suspect, and with one girl dead and another missing, he's suddenly at the centre of a deadly puzzle that reaches right through the small town of Griffon - from its bullying police force to its strangely furtive mayor - and finally to one family's shocking secret.
Tags from this library: No tags from this library for this title. Log in to add tags.

"Sometimes doing the right thing is the biggest mistake you'll ever make" --Cover.

Cal Weaver reluctantly agrees to give a lift to a bedraggled-looking girl one rainy night, though he's aware that inviting a teenaged girl into his car may not be the smartest move. During their short journey, Cal discovers that Claire Sanders is not all she seems. But nothing prepares him for the consequences of trying to help her out. The next morning he finds he's gone from Good Samaritan to murder suspect, and with one girl dead and another missing, he's suddenly at the centre of a deadly puzzle that reaches right through the small town of Griffon - from its bullying police force to its strangely furtive mayor - and finally to one family's shocking secret.

Shortly after the apparent drug-fueled suicide of their teenage son, Scott, Cal and Donna Weaver each deal with their grief in their own way, neither able to close the growing chasm that has formed between them. While Donna finds comfort in her artwork and in trying to create a perfect impression of her son, Cal uses his skills as a private investigator to track down the people he feels are responsible for his son's death, albeit indirectly. However, Cal's search for justice is sidelined when, while stopped at a light on a rainy night, he picks up a teenage hitchhiker, Claire, and becomes an unwitting participant in her ploy. When Claire disappears, Cal's subsequent quest to find her leads him down an unexpected path to uncover secrets long held by some of the residents of his seemingly sterling hometown of Griffon. Verdict Fast-paced, spine-tingling plot twists have long been a staple of Barclay's (Trust Your Eyes) domestic thrillers, and his latest installment does not disappoint. Writing primarily from the first-person perspective, Barclay paints character portraits that are strikingly lifelike and entirely believable. Although the story runs a bit long, the surprising tidbits that are revealed at key points keep the reader engrossed to the very end.-Natasha Grant, New York (c) Copyright 2013. Library Journals LLC, a wholly owned subsidiary of Media Source, Inc. No redistribution permitted.

Early in this intricately plotted stand-alone from Arthur Ellis Award-winner Barclay (Trust Your Eyes), middle-aged PI Cal Weaver hesitates to pick up a teenage girl hitchhiking one evening outside a bar in Griffon, N.Y., just across the Canadian border. He decides to give her a ride after she says she was a friend of Cal's teenage son, Scott, who died a few months earlier while under the influence of ecstasy. The girl, who gives only her first name, Claire, soon feels sick, so he pulls over at a burger place he knows. The girl who returns to his car resembles Claire, but is not Claire. When confronted, the second teen demands to be let out. The next day both girls are missing, and Cal feels honor bound to find them. To complicate things, Claire turns out to be Claire Sanders, the daughter of Griffon's mayor. Barclay offers one surprise after another in a mystery that unfolds with the mundane heroism and tragedy of a local news story. Agent: Helen Heller, Helen Heller Agency (Canada). (Aug.) (c) Copyright PWxyz, LLC. All rights reserved.

When Cal Weaver spots hitchhiking teenager Claire Saunders, his instincts scream that he should just get her a cab, but Claire's vulnerability nudges the private investigator's grief over his son's recent death, and he offers to drive her home. In those few moments of Cal's grief-clouded judgment, Claire makes Cal an unwitting instrument in her intricate plot to disappear. The next day, Claire's best friend, Hanna, is found murdered after disguising herself as Claire to provide diversion for Claire's escape. When police target Cal for Hanna's murder, he knows that finding Claire and discovering why she ran is the only way to keep them both safe. The most obvious lead is the feud between the town's mayor, who is Claire's father, and the police chief over accusations of police brutality, but Cal feels he's missing something. The characters and small-town New York setting are vividly rendered, and that credibility shifts this thriller's premise from far-fetched to plausibly weird. Another success for Barclay, with unfettered storytelling, rapid pacing, and sympathetic characters primed to please hordes of eager summer readers.--Tran, Christine Copyright 2010 Booklist

Atmospheric tale of small-town mayhem by Toronto-based mystery writer Barclay (Trust Your Eyes, 2012, etc.). Barclay may live over the line, but he's got a fondness for upstate New York, especially that within earshot of Niagara Falls, where bad guys can dump their victims and watch them bob in the waves just for grins. It takes a certain sadistic type to do so, of course. Check: Barclay's got one. Maybe more than one, given the strong-arm ways of the local gendarmerie. The story takes off with a start from the get-go, when private investigator Cal Weaver, lost in a depressed fog since the death of his son, picks up a hitchhiker who claims to have been a friend of the boy--and perhaps more. Bad idea, picking up a young woman in the rain, but that's where that insistent tap on the window comes in, and that's where things begin to go haywire. Suffice it to say that by the end of the tale, there's a pile of bodies to account for ("You don't think he did it," says his wife of one suspect. "I don't," Cal replies. "But I've been wrong before"), and Barclay has skillfully hidden the identity of the perp behind a couple of barrels' worth of red herrings. Barclay turns in a taut procedural. His prose is often relaxed, even conversational; "It struck me that she was dressed for much colder weather than we were currently having" lacks the smart-alecky zinginess of a Raymond Chandler, but it's also exactly the sort of thing a real-live gumshoe on a cooling trail might think. A smart whodunit with satisfying twists and turns. Mystery buffs couldn't ask for more.]] Copyright Kirkus Reviews, used with permission.
More book reviews at iDreamBooks.com