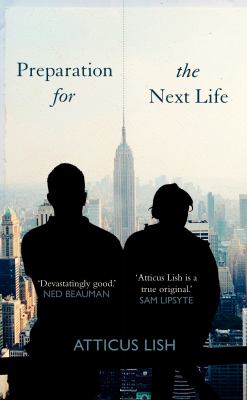 Preparation for the next life / Atticus Lish.

DDC classification: 813.6 Summary: Zou Lei, a Chinese Muslim of the Uighur tribe, enters the U.S. via Mexico, and makes her way to New York City. Keeping a low profile and employed in a restaurant, she meets Skinner, a veteran of the Iraqi war, who's afflicted with PTSD.
Tags from this library: No tags from this library for this title. Log in to add tags.

Zou Lei is an illegal immigrant who works at a Chinese restaurant in Queens in search of a better life in the Land of the Brave. Brad Skinner has recently arrived in New York following a tour in Iraq and is determined to party as hard as he can in order to start 'wanting to live again'. When their paths cross, they discover that new starts may be possible for both of them, if they can survive homelessness, lockup and Skinner's posttraumatic stress disorder, which may be more prophecy than madness. Set in the underbelly of New York, Preparation for the Next Life extols an America as seen from the fringes of society in devastating detail and destroys the myth of the American Dream through two of the most remarkable characters in contemporary fiction. Powerful, realistic and raw, this is one of the most ambitious - and necessary - chronicles of our time.

Zou Lei, a Chinese Muslim of the Uighur tribe, enters the U.S. via Mexico, and makes her way to New York City. Keeping a low profile and employed in a restaurant, she meets Skinner, a veteran of the Iraqi war, who's afflicted with PTSD.

Lish (Life Is with People) turns to fiction with this stunning debut novel that plumbs the underbelly of New York City, tracing the relationship of Zou Lei, a Chinese immigrant working in a tiny noodle restaurant, and Skinner, an AWOL Iraqi war veteran and wanderer. Enduring stints in prison and homelessness, Zou Lei and Skinner experience life on society's fringes. Lish destroys the American dream with the struggles his characters face-for Zou Lei, it's enough to survive: "forget living like an American. It was enough to be free on the streets." New York City is anything but idyllic; through the perspective of the two protagonists, it is frightening and cruel and alien. Zou Lei and Skinner have their budding relationship tested by insurmountable odds, and their own foibles and peculiarities are rendered with vivid detail. Lish's prose is at once raw and disciplined, and every word feels necessary. (Nov.) © Copyright PWxyz, LLC. All rights reserved.
More book reviews at iDreamBooks.com