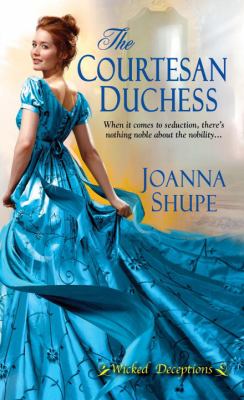 Genre/Form: Historical fiction. | Romance fiction.DDC classification: [Fic] Summary: Disguising herself as a courtesan to get the attention of her husband, who she has not seen in eight years, the Duchess of Colton arrives in 1816 Venice in where she sets her plan of seduction in motion and is shocked to discover that the man she married just could be the love of her life.
Tags from this library: No tags from this library for this title. Log in to add tags.

1. Learn the most intimate secrets of London's leading courtesan.
2. Pretend to be a courtesan yourself, using the name Juliet Leighton.
3. Travel to Venice and locate said husband.
4. Seduce husband, conceive an heir, and voila, your future is secure!

For Julia, the Duchess of Colton, such a ruse promises to be foolproof. After all, her husband has not bothered to lay eyes on her in eight years, since their hasty wedding day when she was only sixteen. But what begins as a tempestuous flirtation escalates into full-blown passion-- and the feeling is mutual! Could the man the Courtesan Duchess married actually turn out to be the love of her life?

Disguising herself as a courtesan to get the attention of her husband, who she has not seen in eight years, the Duchess of Colton arrives in 1816 Venice in where she sets her plan of seduction in motion and is shocked to discover that the man she married just could be the love of her life.

Forced into an arranged marriage when she was only 16 and promptly deserted by the groom, Julia Seaton, Duchess of Colton, hasn't seen her libertine husband, Nicholas, in eight years. Now, shunned by his family and nearly destitute, Julia devises a daring scheme to become pregnant and secure her future by transforming herself into an irresistible courtesan (with the help of Pearl Kelly, one of London's best) and seducing her unwitting spouse. To Julia, it's the perfect plan! Then their emotions explode, the duke learns the truth, and everything begins to unravel. Explicit sex singes the pages, and real danger lurks in the shadows as Julia and Nick battle distrust and resentment as they try to forge a future in a lively story liberally enhanced by Miss Kelly's sage advice. VERDICT A naïve, desperate heroine and a thoughtless, rakehell hero mature delightfully as they come into their own in this steamy debut that is the first of a back-to-back trilogy and skillfully sets the stage for the stories to come (The Harlot Countess in May and The Lady Hellion in June). Shupe lives in South Orange, NJ. © Copyright 2015. Library Journals LLC, a wholly owned subsidiary of Media Source, Inc. No redistribution permitted.

Shupe's heartfelt debut opens the Wicked Deception series, a Regency trilogy featuring fearless heroines. Julia, the Duchess of Colton, disguises herself as Juliet Leighton, a well-known London courtesan, and travels to Venice to see the husband who abandoned her following their wedding eight years earlier. She believes that the only way to avoid financial ruin is to produce an heir, even if that means duplicitously seducing her own husband. Julia is tenacious and determined, and entirely unprepared to actually like her husband, Nick, whose caring nature seems at odds with his unwillingness to face his responsibilities to her. After learning that "Juliet" is his wife, Nick struggles to reconcile his anger over Julia's deception with his continued desire for her. Romantic tension heightens the intensity of the sensuous love scenes, as the two struggle to mend their fractured relationship. This original and alluring novel is a very promising beginning to Shupe's career. Agent: Laura Bradford, Bradford Literary Agency. (Apr.) © Copyright PWxyz, LLC. All rights reserved.

Enough is enough. Immediately after their wedding eight years ago, Julia's husband, Nicholas Francis Seaton, the Duke of Colton, abandoned her in London for a life of wine, women, and song on the Continent. While Julia herself couldn't care less where her husband is, Nick's cousin, the odious Lord Templeton, has been using Nick's absence to slowly whittle away at Julia's allowance. Julia believes the only way she can thwart Templeton's designs on the dukedom is by producing a male heir, which is somewhat difficult to do with Nick cavorting with an assortment of trollops a continent away. Well, if Nick won't come to her, then Julia is simply going to have to go to him. After extensive tutoring from London's most infamous courtesan, Julia arrives in Venice disguised as Mrs. Juliet Leighton, intent on seducing her husband into giving her the baby she desperately needs. RWA Golden Heart winner Shupe launches her romance-writing career with a polished Regency-set historical that successfully merges engaging characters, steamy sensuality, and a dash of danger into one captivating romance.--Charles, John Copyright 2015 Booklist
More book reviews at iDreamBooks.com