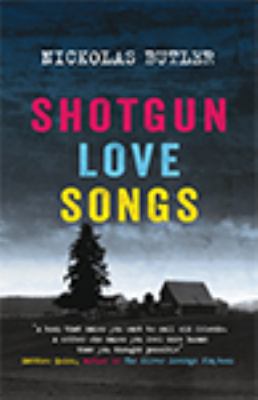 Genre/Form: Domestic fiction. | Large type books.DDC classification: 813.6 Summary: "Henry, Lee, Kip and Ronny grew up together in rural Wisconsin. Friends since childhood, their lives all began the same way, but have since taken different paths. Henry stayed on the family farm and married his first love, while the others left in search of something more. Ronny became a rodeo star, Kip made his fortune in the city, and musician Lee found fame - but heartbreak, too. Now all four are back in town for a wedding, each of them hoping to recapture their old closeness but unable to escape how much has changed. Aimd the happiness of reunion and celebration, old rivalries resurface, and a wife's secret threaten to tear both a marriage and a friendship apart..." --Publisher's description.
Tags from this library: No tags from this library for this title. Log in to add tags.

"Henry, Lee, Kip and Ronny grew up together in rural Wisconsin. Friends since childhood, their lives all began the same way, but have since taken different paths. Henry stayed on the family farm and married his first love, while the others left in search of something more. Ronny became a rodeo star, Kip made his fortune in the city, and musician Lee found fame - but heartbreak, too. Now all four are back in town for a wedding, each of them hoping to recapture their old closeness but unable to escape how much has changed. Aimd the happiness of reunion and celebration, old rivalries resurface, and a wife's secret threaten to tear both a marriage and a friendship apart..." --Publisher's description.

Told from alternating viewpoints, this full-cast audio brings Butler's portrait of male friendship in rural Little Wing, WI, to life. Henry, Lee, Kip, and Ronny grew up together and then went their separate ways. Farmer Henry is tied to the land, but Lee has become a famous musician. Kip is a successful commodities trader, and Ronny is riding high as a rodeo star. But they are inexorably bound and one by one are drawn home for reasons that include serious injury and a failed marriage. The women surrounding these men cannot totally understand or enter this male camaraderie. Even Beth, Henry's wife, who is important to each of these men and is as tied to Little Wing as any of them, marvels at and envies their connection. Sure, there is conflict, culture clash, even heartbreak among them, but the ties that bind are strong, and their friendship will endure. Narrators Ari Fliakos, Maggie Hoffman, Scott Shepherd, Scott Sowers, and Gary Wilmes do an excellent job of portraying the various characters. Verdict Lyrical writing paints a portrait of friendship in a small town that will seem familiar to any Midwesterner. Recommended. ["While not ignoring the economic hardships of contemporary rural life, Butler stacks the deck a bit in favor of small-town values vs. big city shallowness. Overall, though, this is a warm and absorbing depiction of male friendship," read the review of the Thomas Dunne: St. Martin's hc, LJ 12/13.]-Judy Murray, Monroe Cty. Lib. Syst., Temperance, MI (c) Copyright 2014. Library Journals LLC, a wholly owned subsidiary of Media Source, Inc. No redistribution permitted.

Butler uses multiple narrators to tell the story of a group of friends, born and raised in Little Wing, Wis., in this affecting but precious debut novel. The book opens with Hank, who became a farmer and stayed in the small town to raise a family with his wife Beth. Lee, the indie rocker who made it big but regularly comes back to Little Wing, has his say, along with Kip, who traded commodities in Chicago but has moved back. And Ronnie is a little "slow," damaged by rodeo riding. Their voices and their memories create a rich, overlapping narrative that is, at bottom, a love letter to the Midwest and its small, mostly forgotten towns. The characters are in that restless period of their early 30s: Hank and Beth have a family, but both long for something different (including more money); Lee gets married and divorced and wrestles with fame (the title of the book refers to a bestselling album of his); Kip is trying to write the next chapter of his life. The author romanticizes the landscape and the notion of community-as if such ideals were limited to small town, agrarian dreams. More seriously, his characters are too similar-all of them too lyrical and too insightful. Butler's prose is often beautiful, and the narrative churns along well, but the book just isn't convincing enough to get the reader to buy all the way in. First printing: 150,000 copies. (Mar.) (c) Copyright PWxyz, LLC. All rights reserved.

The hearty Midwest, which thrums and beats through tiny Little Wing, Wisconsin an Anytown, USA, if there ever was one assumes the whole soul of Butler's fetching debut, if only to end up proving how unassuming it is. Chapters are voiced alternately by five longtime friends: there are Henry and Beth, married and tethered to their farm and kids; gold-hearted Ronny, babied by the others after a spell of rough living as a rodeo king; Kip, who's restoring Little Wing's decrepit old mill after pulling down millions in Chicago; and Lee, the newly successful musician whose haunting first album lends the novel its name. In bars and under stars, through this small group of those who've never left, those who regret leaving, and those who wish they had the town in their rearview mirror, Butler examines just what it means to be from a place and if sharing that from-some-place is more a reason to stay in touch, or a reason not to. Readers can feel the winter cold on the other side of the neon sign and hear the peanut shells crunching underfoot.--Bostrom, Annie Copyright 2010 Booklist

A debut novel that delves so deeply into the small-town heartland that readers will accept its flaws as part of its charm. "Write what you know" is the first dictum directed toward aspiring fiction writers, and there's no doubt that Butler knows his fictional Little Wing inside out. It's a Wisconsin farm town not far from Eau Claire, where the author was raised, and it holds a central place in the hearts of those who came of age thereparticularly the four men who were boyhood friends and who narrate the novel's alternating chapters, along with the fifth, a woman who was the childhood sweetheart of at least two of them. Beth and Henry are the married couple who remained to farm in Little Wing and, despite their financial struggles, are in some ways the envy of the others. Lee, who is Henry's best friend, has become "America's most famous flannel-wearing indie troubadour," an artist so successful he hobnobs with those that others know mainly from celebrity magazines. But he only feels at home in Little Wing, where he found his voice and wrote the songs on the album that catapulted him to fame (and gives the novel its title). Kip made millions for others and did well for himself as a broker in Chicago but has returned to Little Wing to restore its mill as a commercial center and to show off the beautiful woman who will be his wife. Ronny left town as a rodeo rider and an alcoholic and has returned to recover after a brain-damaging mishap. There are four weddings in the novel, a few separations, a bunch of drunken adventures and confessions, and a fairly preposterous ending. But there is also a profound empathy for the characters and the small-town dynamic that the reader will likely share, an appreciation for what "America was, or could be." Despite some soap-opera machinations and occasional literary overreach, the novel will strike a responsive chord in any reader who has found his life reflected in a Bob Seger song.]] Copyright Kirkus Reviews, used with permission.
More book reviews at iDreamBooks.com