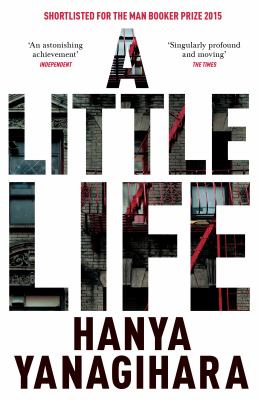 Genre/Form: Domestic fiction. | Bildungsromans.DDC classification: 813/.6 Awards: Man Booker Prize for Fiction : Shortlist, 2015. | International Dublin Literary Award : Shortlist, 2017.Summary: "When four classmates from a small Massachusetts college move to New York to make their way, they're broke, adrift, and buoyed only by their friendship and ambition ... Over the decades, their relationships deepen and darken, tinged by addiction, success, and pride. Yet their greatest challenge, each comes to realize, is [their center of gravity] Jude, ... by midlife a terrifyingly talented litigator yet an increasingly broken man, his mind and body scarred by an unspeakable childhood, and haunted by what he fears is a degree of trauma that he'll not only be unable to overcome--but that will define his life forever"--Amazon.com.
Tags from this library: No tags from this library for this title. Log in to add tags.

Shortlisted for the 2015 Man Booker Prize'Astonishing and unsettling ... A masterwork' San Francisco Chronicle'Announces Yanagihara as a major American novelist' Wall Street JournalBrace yourself for the most astonishing, challenging, upsetting and profoundly moving book in many a season. An epic about love and friendship in the twenty-first century that goes into some of the darkest places fiction has ever traveled and yet somehow improbably breaks through into the light. When four graduates from a small Massachusetts college move to New York to make their way, they're broke, adrift, and buoyed only by their friendship and ambition. There is kind, handsome Willem, an aspiring actor; JB, a quick-witted, sometimes cruel Brooklyn-born painter seeking entry to the art world; Malcolm, a frustrated architect at a prominent firm; and withdrawn, brilliant, enigmatic Jude, who serves as their center of gravity. Over the decades, their relationships deepen and darken, tinged by addiction, success, and pride. Yet their greatest challenge, each comes to realize, is Jude himself, by midlife a terrifyingly talented litigator yet an increasingly broken man, his mind and body scarred by an unspeakable childhood, and haunted by what he fears is a degree of trauma that he'll not only be unable to overcome-but that will define his life forever.In a remarkable and precise prose, Yanagihara has fashioned a tragic and transcendent hymn to brotherly love, a masterful depiction of heartbreak, and a dark examination of the tyranny of memory and the limits of human endurance.

"When four classmates from a small Massachusetts college move to New York to make their way, they're broke, adrift, and buoyed only by their friendship and ambition ... Over the decades, their relationships deepen and darken, tinged by addiction, success, and pride. Yet their greatest challenge, each comes to realize, is [their center of gravity] Jude, ... by midlife a terrifyingly talented litigator yet an increasingly broken man, his mind and body scarred by an unspeakable childhood, and haunted by what he fears is a degree of trauma that he'll not only be unable to overcome--but that will define his life forever"--Amazon.com.

Yanagihara follows her debut novel, The People in the Trees, with a deceptively simple tale of four male friends, Jude, Willem, Malcolm, and JB, who meet during their college years at Ivy League institutions. The men choose to continue their journeys into adulthood together by relocating jointly to New York. As they sustain their friendships into their fifties, the author delivers tales of their loyalty, love, and support for one another. However, lying beneath the surface is an emotionally disturbing story line about Jude, a highly successful lawyer and the brightest of the four men. The horrors of Jude's victimization during his youth by the brothers of a monastery and his eventual abduction by Brother Luke, a pedophile and pimp, force him to struggle relentlessly with inner demons and a deep-seated distrust of others, with his pain manifested in constant acts of cutting. VERDICT As in her previous novel, Yanagihara fearlessly broaches difficult topics while simultaneously creating an environment that her audience will find caring and sensitive. Not all readers will embrace this work, given its intense subject. However, for those strong of stomach or bold enough to follow the characters' road of friendship, this heartbreaking story certainly won't be easily forgotten.-Shirley Quan, Orange Cty. P.L., Santa Ana, CA (c) Copyright 2015. Library Journals LLC, a wholly owned subsidiary of Media Source, Inc. No redistribution permitted.

Yanagihara follows her 2013 debut novel, The People in the Trees, with an epic American tragedy. The story begins with four college friends moving to New York City to begin their careers: architect Malcolm, artist JB, actor Willem, and lawyer Jude. Early on, their concerns are money and job related as they try to find footholds in their respective fields. Over the course of the book, which spans three decades, we witness their highs and lows as they face addiction, deception, and abuse, and their relationships falter and strengthen. The focus narrows as the story unspools-and really, this is Jude's story. Unlike his friends, who have largely ordinary lives, Jude has a horrific trauma in his past, and his inner demons are central to the story. Throughout the years, Jude struggles to keep his terrible childhood secret and to trust those who love him. He cuts himself and contemplates suicide, even as his career flourishes and his friends support him. This is a novel that values the everyday over the extraordinary, the push and pull of human relationships-and the book's effect is cumulative. There is real pleasure in following characters over such a long period, as they react to setbacks and successes, and, in some cases, change. By the time the characters reach their 50s and the story arrives at its moving conclusion, readers will be attached and find them very hard to forget. (Mar.) (c) Copyright PWxyz, LLC. All rights reserved.

This long, claustrophobically written novel by the author of The People in the Trees (2013) follows the lives of four college men (and their many friends, nearly all male) from their early postgraduation days in New York through much of their accomplished adult lives, and backward to their childhoods. It opens with them helping Willem and the fragile Jude St. Francis move into an apartment on Lispenard Street and then delineates the course of their lives. They include Malcolm, a light-skinned African American architect from a wealthy background; JB, an occasional drug-using artist of Haitian ancestry (the author does a great job of describing his art no easy task); Willem, the handsome actor who, as we first meet him, is, of course, waiting tables downtown; and, at center stage, Jude. Although Jude is a successful litigator, his full background is murky, though what we do learn about it is horrific. Jude is frail, vulnerable, private, and given to cutting himself. In his neediness, he is the focus of the others' existence. This profoundly disturbing book is about pain and compulsion, secrets and betrayals, sexuality and loss but, finally, about friendship.--Levine, Mark Copyright 2015 Booklist

Four men who meet as college roommates move to New York and spend the next three decades gaining renown in their professionsas an architect, painter, actor and lawyerand struggling with demons in their intertwined personal lives. Yanagihara (The People in the Trees, 2013) takes the still-bold leap of writing about characters who don't share her background; in addition to being male, JB is African-American, Malcolm has a black father and white mother, Willem is white, and "Jude's race was undetermined"deserted at birth, he was raised in a monastery. Two of them are straight, one is bisexual, and Jude, whose youth was unspeakably traumatic in a way that's revealed slowly over the course of the book, is gay. There isn't a single significant female character, and for a long novel, there isn't much plot. There aren't even many markers of what's happening in the outside world; Jude moves to a loft in SoHo as a young man, but we don't see the neighborhood change from gritty artists' enclave to glitzy tourist destination. What we get instead is an intensely interior look at the friends' psyches and relationships, and it's utterly enthralling. The four men think about work and creativity and success and failure; they cook for each other, compete with each other and jostle for each other's affection. JB bases his entire artistic career on painting portraits of his friends, while Malcolm takes care of them by designing their apartments and houses. When Jude, as an adult, is adopted by his favorite Harvard law professor, his friends join him for Thanksgiving in Cambridge every year. And when Willem becomes a movie star, they all bask in his glow. Eventually, the tone darkens and the story narrows to focus on Jude as the pain of his past cuts deep into his carefully constructed life. The phrase "tour de force" could have been invented for this audacious novel. Copyright Kirkus Reviews, used with permission.
More book reviews at iDreamBooks.com