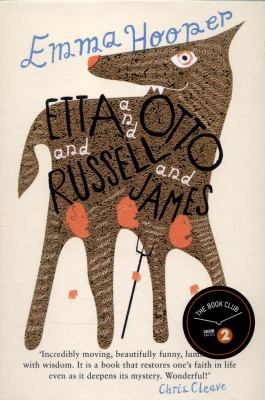 Etta and Otto and Russell and James / Emma Hooper.

| Voyages and travels -- Fiction | Walking -- FictionSummary: Etta's greatest unfulfilled wish, living in the rolling farmland of Saskatchewan, is to see the sea. And so, at the age of eighty-two she gets up very early one morning, takes a rifle, some chocolate, and her best boots, and begins walking the 2,000 miles to water. Meanwhile her husband Otto waits patiently at home, left only with his memories. Their neighbour Russell remembers too, but differently - and he still loves Etta as much as he did more than fifty years ago, before she married Otto.
Tags from this library: No tags from this library for this title. Log in to add tags.

Etta's greatest unfulfilled wish, living in the rolling farmland of Saskatchewan, is to see the sea. And so, at the age of eighty-two she gets up very early one morning, takes a rifle, some chocolate, and her best boots, and begins walking the 2,000 miles to water. Meanwhile her husband Otto waits patiently at home, left only with his memories. Their neighbour Russell remembers too, but differently - and he still loves Etta as much as he did more than fifty years ago, before she married Otto.

Starred Review. Eighty-three-year-old Etta embarks on a 3,200-kilometer journey walking from Saskatchewan to Halifax in order to see the ocean for the first time. Along the way, she befriends a talking coyote named James, a reporter who decides she'd rather walk with Etta than report, and throngs of fans who follow her progress from town to town. Her husband, Otto, passes the time until her return by writing Etta letters he never mails, learning to bake from her ancient recipe cards, and creating papier-mache animal sculptures. Russell, who lives on the neighboring farm, goes after Etta, and, in the process, decides that it's time to begin his own journey. Each character carries heavy memories: tragic pregnancies, the horrors of World War II, a broken heart, an injured limb. And over all, the dust of drought settles, the lack of water a constant pall, the search for water a means of redemption. VERDICT Debut novelist Hooper's spare, evocative prose dips in and out of reality and travels between past and present creating what Etta tells Otto is "just a long loop." This is a quietly powerful story whose dreamlike quality lingers long after the last page is turned. For literary fiction fans. [See Prepub Alert, 4/14/14.]-Joy Humphrey, Pepperdine Univ. Law Lib., Malibu, CA (c) Copyright 2014. Library Journals LLC, a wholly owned subsidiary of Media Source, Inc. No redistribution permitted.

Hooper's arresting debut novel, with its spare, evocative prose, seamlessly interweaves accounts of the present-day lives of its eponymous main characters with the stories of their pasts and how they first connected with each other. The book starts with a note that Etta leaves for her husband: "Otto, I've gone. I've never seen the water, so I've gone there. Don't worry, I've left you the truck. I can walk. I will try to remember to come back." Thus begins elderly Etta's journey from Saskatchewan to the coast, and the same ocean that once took her dear husband overseas to fight in WWII. She is armed with minor provisions, some clothes, and a sheet of paper with names on it, starting with "You: Etta Gloria Kinnick of Deerdale farm. 83 years old in August." Along the way, Etta meets a coyote she names James; she considers him her friend and they have many long conversations as they travel together. As Etta walks thousands of miles to her destination, three touching stories unfold: those of Otto, from a family of 14 brothers and sisters; Russell, the abandoned boy who lived next door to Otto and becomes a de facto part of his family; and Etta, who lost her sister at a young age. Hooper, with great insight, explores the interactions and connections between spouses and friends-the rivalries, the camaraderie, the joys and tragedies-and reveals the extraordinary lengths to which people will go in the name of love. Agent: Claudia Ballard, WME Entertainment. (Jan.) © Copyright PWxyz, LLC. All rights reserved.

*Starred Review* Etta Vogel, 83, walks out of her home on the Saskatchewan prairie, leaving a succinct note for her husband, Otto: she's walking 3,200 kilometers across Canada toward the ocean; she will try to remember to come back. Otto understands, for once, during WWII, he, too, was pulled to the sea and beyond, a calamity that turned his hair prematurely white at age 17. Russell is Otto's oldest friend and erstwhile rival for Etta's affections. While Otto chooses to stay home and wait for Etta's return, Russell rushes off to find her, and he does, provinces away, in the company of a coyote named James, Etta's escort, protector, and familiar. Convinced she does not need him (did she ever?), Russell retreats in search of his own muses, the deer, elk, and caribou that roam the northern forests. Completely alone now, Otto mourns the absence of the two people who have always mattered the most, losing himself in artistic flights of fancy and fearful memories of childhood and combat. Drawing on wisdom and whimsy of astonishing grace and maturity, Hooper has written an irresistibly enchanting debut novel that explores mysteries of love old and new, the loyalty of animals and dependency of humans, the horrors of war and perils of loneliness, and the tenacity of time and fragility of memory.--Haggas, Carol Copyright 2014 Booklist

Hooper's debut is a novel of memory and longing and desires too long denied. On Saskatchewan's Great Plains grew 15 Vogel children. When Otto Vogel was still a child, half-orphaned Russell joined the brood. The Great Depression burned on, crops failed, and schooling was casual. One of the teachers was Etta, no older than Otto and Russell. World War II came. Otto left. Russell, broken leg improperly mended, could not. As Hooper's shifting narrative opens, now-83-year-old Etta awakens, intending to walk to Canada's east coast, leaving a brief note for her husband, Otto. She carries a bit of food, a rifle, and a note of her identity and home. To a Cormac McCarthy-like narrativesans quotation marks, featuring crisp, concise conversationsHooper adds magical realism: Etta's joined by a talking coyote she names James, who serves as guide and sounding board. With Etta absent, Otto begins baking from her recipes, his companion a guinea pig, always silent. Soon Otto becomes obsessed with constructing a menagerie of papier-mch wildlife. Russell, shy lifelong bachelor and Etta's wartime lover, follows her, finds her, only to hear her urge him to seek his own quest "because you want to and you're allowed to and you can. You could have if you wanted to enough"the novel's thematic heart. Russell disappears into flashbacks. Hooper reveals more of Etta and Otto in letters exchanged during World War II, where Otto by turns is terrified, sickened and enthralled. Otto marries Etta on return, a less than perfect union shadowed by damaged Otto striking out at Etta. With beautifully crafted descriptionsderelict farm machinery as "gently stagnant machines"Hooper immerses herself in characters, each shaped by the Depression. The book ends with sheer poetry, stunning and powerful, multiple short chapters where identities and dreams, longings and memories shift and cling to one character and then another within the "long loop of existence." A masterful near homage to Pilgrim's Progress: souls redeemed through struggle. Copyright Kirkus Reviews, used with permission.
More book reviews at iDreamBooks.com