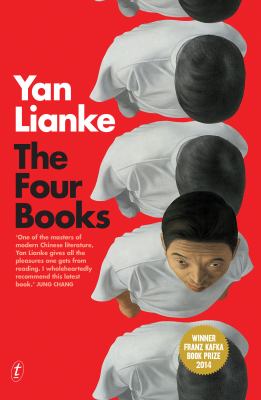 The four books / Yan Lianke; translated from the Chinese by Carlos Rojas.

| China -- Economic conditions -- 1949-1976 -- FictionGenre/Form: Historical fiction.DDC classification: 895.1352 Awards: The Man Booker International Prize : Shortlist 2016.Summary: A mythical tale portraying the grotesque oppression of [China's] Great Leap Forward. In the ninety-ninth district of a labour camp, the Author, Musician, Scholar, Theologian and Technician undergo re-education, to restore their revolutionary zeal. In charge of this process is the Child, who delights in enforcing draconian rules. The Four Books tells the story of one of China's most controversial periods. It also reveals the power of camaraderie, love and faith against oppression in the darkest possible times.
Tags from this library: No tags from this library for this title. Log in to add tags.

Yan Lianke's most powerful novel yet. Reminiscent of A Day in the Life of Ivan Denisovich and Darkness at Noon , Yan's mythical tale portrays the grotesque persecution during the Great Leap Forward.

In the ninety-ninth district of a labour camp, the Author, Musician, Scholar, Theologian and Technician undergo re-education, to restore their revolutionary zeal. In charge of this process is the Child, who delights in enforcing draconian rules.

The Four Books tells the story of one of China's most controversial periods. It also reveals the power of camaraderie, love and faith against oppression in the darkest possible times.

'A searing, allegorical view of Chinese society during some of the darkest moments of the Mao era...Yan cements his reputation as one of China's most important - and certainly most fearless - living writers.' Kirkus Reviews

A mythical tale portraying the grotesque oppression of [China's] Great Leap Forward. In the ninety-ninth district of a labour camp, the Author, Musician, Scholar, Theologian and Technician undergo re-education, to restore their revolutionary zeal. In charge of this process is the Child, who delights in enforcing draconian rules. The Four Books tells the story of one of China's most controversial periods. It also reveals the power of camaraderie, love and faith against oppression in the darkest possible times.

Translated from the Chinese.

Starred Review. Yan (Dream of Ding Village) has built his substantial career on exposing the surreal absurdity of China's 20th-century tragedies. His latest-in-translation features the 99th district of a reeducation camp, where intellectuals controlled by a maniacally cruel yet innocently naive child endure merciless conditions designed to recommit them to communism. Among the Child's prisoners are the Author, the Scholar, the Musician, and the Theologian, who like other inmates must fulfill impossible production quotas in areas from harvesting to smelting, driven by the Child's promises of freedom. Surviving the Great Famine, which experts estimate claimed a staggering 2,043 million victims, has unfathomable costs. Yan's multilayered novel is presented as dovetailing excerpts from the titular Four Books: the Author's Criminal Record, written in exchange for early release; the Author's own Old Course; an anonymous narrative called Heaven's Child; and a philosophical fragment from A New Myth of Sisyphus. The title is also a brilliant evocation of the foreshadowing of death (four and death are homophones in Chinese), Christianity's Four Gospels, and Confucianism's Four Books. Ironically, the Four Books and Five Classics of Confucianism were the foundation of imperial China's civil service exams, which created the intellectual class: communism's enemies. Books remain significant throughout-hidden, beloved, confiscated, burned. VERDICT Like Xianhui Yang's unrelenting Woman from Shanghai and Xinran's gentler China Witness, Yan's new work is vital historical testimony. [See Prepub Alert, 9/29/14.]-Terry Hong, Smithsonian BookDragon, Washington, DC (c) Copyright 2015. Library Journals LLC, a wholly owned subsidiary of Media Source, Inc. No redistribution permitted.

Yan, a finalist for the Man Booker International Prize, pens a biting satire about Chinese re-education camps during the Great Leap Forward that's as haunting as it is eye-opening. In this tale, intellectuals and dissidents are sent to a labor camp, where they promise to perform impossible tasks in order to gain their freedom. These intellectuals-"the Musician," forced to prostitute herself for food; her lover, "the Scholar"; "the Theologian," who ends up cursing God for his fate; and "the Author," commissioned to write reports on the sins of the others, struggle for survival. Overseeing all of them is "the Child," who is as vulnerable to the whims of his bureaucratic superiors as his prisoners are to him. As the prisoners careen from impossible production quotas to slow death by starvation, the Child eventually offers to sacrifice himself for their freedom, in a stark parody of both Maoist ideals and Christian scripture. Yan has created a complex, epic tale rife with allusion. He effortlessly moves from Eastern to Western references, and even readers without a background in Chinese history and culture will find his story fascinating and immersive. The novel is a stinging indictment of the illogic of bureaucracy and tyranny, but the literary structure is tight and the prose incredibly accessible. Readers will have difficulty putting this down. Agent: Laura Susjin, Susjin Agency. (Mar.) © Copyright PWxyz, LLC. All rights reserved.

Yan's rich and complex novel deals with the Great Leap Forward, the official program that was conducted from 1958 to 1961 to transform China's economy. As much an allegory as a realistic work of fiction, the novel is set in a reeducation center where intellectuals have been sent to reform their thinking through labor. Instead of names, the inmates are called by their avocations: the Author, the Theologian, the Scholar, the Technician, the Musician, and so forth. Presiding over the camp is the Child, who, despite his youth and his often infantile behavior, holds the fate of the intellectuals in his hands. The reeducation center strives to meet ever-increasing and unrealistic targets in the production of grain and steel until the policies of the higher-ups result in a nationwide famine, and the inmates begin to starve. Yan, who was awarded the Franz Kafka Prize in 2014, shines a harsh light on a perverse and dehumanizing system, and his novel will be appreciated by readers who are interested in contemporary Chinese fiction.--Quinn, Mary Ellen Copyright 2015 Booklist

A searing, allegorical view of Chinese society during some of the darkest moments of the Mao era. Yan (Lenin's Kisses, 2012, etc.) is no stranger to controversy, running afoul of the censors even while taking a sidelong approach to his criticisms. This novel, more straightforward if sometimes absurd, will doubtless earn him a few more pages in the dossier. The titular four books are an echo of the Confucian classic by that name that the Communist state sought to undo, but they are also four fictitious texts that wend their ways through Yan's narrativefour texts that are layered onto still other texts, including the Christian Bible, which exercises an odd power over the story as a whole. The time is that of the so-called Great Leap Forward, the setting a re-education camp along the banks of the Yellow Riveror, at least, where the river once flowed before the state trumped nature and moved it. The denizens of the camp are supposed "rightists," bearing names such as the Scholar, the Theologian, the Technician, the Author and so forth. The Author has been charged with the task of chronicling the activities of the others within the campspying on them, that is, so that the overseer, who bears the name the Child, can present a thorough record to the powers that be. The Child, who "appeared to be omniscient," is a mysterious figure, sometimes sympathetic and sometimes tyrannical. All, guards and prisoners alike, are caught up in a vast, dimly comprehensible machine that slowly grinds them to bits. Writes one suicide, having committed cannibalism before hanging himself, "A person's death is like a light being extinguished, after which it is no longer necessary to worry about trying to re-educate and reform them." And if the Child's charges are reduced to such inhuman acts, his fate is no less terrible in the end, Yan's allegory suddenly made very real. Yan cements his reputation as one of China's most importantand certainly most fearlessliving writers. Copyright Kirkus Reviews, used with permission.
More book reviews at iDreamBooks.com